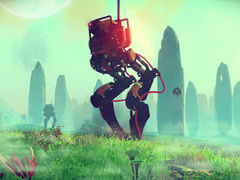 UPDATE: Twitter user milkybar1983 has highlighted that the copy appears to be fake, with the top of the disc label appearing to have been misaligned.

Other copies do, however, appear to have surfaced out in the wild, with another alleged image of the game’s disc being shared to Reddit.

ORIGINAL STORY: An alleged PS4 copy of No Man’s Sky has been sold for $2,000 on eBay, two weeks ahead of its official release.

The copy, sold by eBay user walke-jim, appears to be real, with the listing accompanied by images of the game’s box, disc and its icon on the PS4 home screen.

However, while it seems to be legit, there is always the risk that it could be fake. One thing that strikes me as being a little unusual is that the inlay inside the box is a marketing leaflet for No Man’s Sky – which seems odd to include in the box of the final game.

Furthermore, the leaflet contains a release date of June 21, 2016 – the game’s original release date before being delayed to August. It’s possible that this is how all American copies of No Man’s Sky will ship, but it is a little unusual.

“Be the first to play the most anticipated title of 2016,” says the listing. “Game has been opened and tested.”

Walke-jim’s feedback history suggests he may have sold an early copy of Xbox One shooter Quantum Break on eBay, too, which appears to have been listed for $350. The actual listing no longer seems to be visible on eBay, however, so again, it’s hard to determine whether it was legit.

No Man’s Sky launches on PS4 on August 10, with the PC version following on August 12. It can be pre-ordered on PlayStation Store for £49.99.