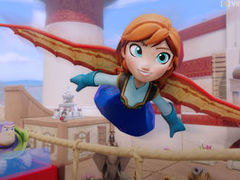 The game launched in the US on August 18 and sales remained strong in December, where it shifted 551,000 units. Rival Skylanders SWAP Force sold marginally more at 597,000.

“We’re thrilled that families and gamers alike have embraced Disney Infinity,” James Pitaro, the president of Disney Interactive, told NYT in an email. “We believe we’ve set the stage for Infinity to be an enduring video game platform.”

Despite over seven million next-gen systems having been sold over the holiday season, Disney Infinity has yet to appear on PS4 and Xbox One. Skylanders SWAP Force was available at both console launches.

A new Disney Infinity title is expected to release later this year.