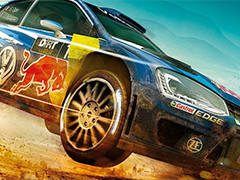 DiRT Rally may be getting a physical PC release next month

DiRT Rally is to receive a physical release on PC next month, according to a listing by Amazon Germany, suggesting the game may be due to exit Early Access soon.

Spotted by NeoGAF, the listing reveals a December 8 release date alongside a brand new box art. You can check out what it looks like in the image below:

The listing follows comments made by designer Darren Hayward last week, who suggested that a final release may be just “days” away from launch.

“You know when you’re making a game in Early Access and work is manic for six months and you put off lots of little jobs and then all of a sudden its days till launch and the final build of DiRT Rally is being made?” Hayward wrote in a blog post last Friday. “That was this week.”

Codemasters has yet to confirm a release date for the final version of DiRT Rally, but has previously told VideoGamer.com that it expects the game to exit Early Access between November and December. A release on console, meanwhile, has yet to be announced.

DiRT returns with an all-new focus on simulation rally racing.

DiRT returns with an all-new focus on simulation rally racing.