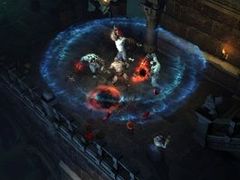 Bill Roper, one of the chief architects behind the Diablo series, has revealed to VideoGamer.com what he thinks of the hotly-anticipated Diablo III.

Blizzard caused an internet storm when it released the first screenshots and gameplay footage of the game in June last year. The game has a brighter, more cartoon-esque art style than previous iterations, similar to that of Blizzard’s hugely successful Craft games, World of Warcraft and StarCraft.

Following the reveal fans launched an online petition calling for a “darker, more realistic” look. At the time of writing the petition has 59285 signatories.

Roper, ex-vice president of Blizzard North, the now defunct Blizzard satellite studio that was responsible for the Diablo games, told VideoGamer.com in an interview to be published later this week, that while he “didn’t look at it (the released Diablo III gameplay footage) and go, oh my God that’s horrible”, “as a player it just didn’t really ring with Diablo”.

He said: “One of the things I always enjoyed about that separation between Blizzard and Blizzard North was that the Diablo games had a very distinct art style. They had different art directors, they had different people working on it, they had a different sensibility about them. Diablo was I think grittier and darker and a little more leaning towards the photo realistic. Whereas the Craft games that were being built down in Irvine were bigger and broader in scope, brighter colours, just different pallets and different presentation. Both of those were very strong from that visual standpoint, for example.

“But it makes complete sense to me where they went because they basically took the Diablo universe and then approached it from the Blizzard Ivine stance for the visuals. That’s the way they approach things. It wasn’t that I looked at it and went, oh my God that looks terrible. I was like, that looks like Blizzard. The guys in Irvine. That’s what it looks like to me. Their interpretation of it.”

When asked if he was disappointed or pleased with Diablo’s new art style, Roper, who is now design director and executive producer of Atari-owned Cryptic Studios, and in charge of Champions Online, a superhero MMO due out on PC this spring, said: “You know, I liked the darker grittier. I liked the differences in art style, to be honest. So, I think I would personally from a player standpoint prefer that.

“I think that one of the things that we always tried to get across was that Diablo was Gothic fantasy and I think there was just a need that was put in there from the visuals that I didn’t necessarily get. I got it from the architecture and to a degree from the character design but not the feeling of the world. I can’t say that I dislike it. I didn’t look at it and go, oh my God that’s horrible. But I looked at it and went, it’s not really… to me as a player it just didn’t really ring with Diablo.”

Diablo III is currently without a release date.

Be sure to check back tomorrow for the first part of our mammoth interview with PC gaming legend Bill Roper.

Do you agree with Bill? Do you prefer “darker grittier”? Or are you happy with Diablo III’s art style? Let us know in the comments section below.