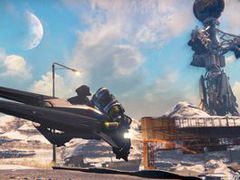 A sequel to Destiny is due to release in 2017, Activision has confirmed, along with a “large new expansion” for the original game later this year.

While details on either release have yet to be confirmed, Activision Publishing boss Eric Hirshberg did refer to the sequel as ‘Destiny 2’ during last night’s investor call and confirmed that it is being developed by Bungie. “We look forward to sharing more with you on this in the future,” he said.

The sequel may have previously been due to release this year, too, CFO Dennis Durken suggests.

It was revealed last year that Destiny 2 was originally planned to release in September 2015, suggesting the sequel may have actually been delayed by two years.

It isn’t yet clear whether the game will be a cross-generation release similar to the original Destiny, or whether it will be available on PS4 and Xbox One only. A PC release hasn’t been confirmed, either.

Destiny launched on PS4, Xbox One, Xbox 360 and PS3 in September 2014. The latest expansion, The Taken King launched last year.