EA Motive has offered players some more insight into the upcoming Dead Space remake via a new blog post.

Entitled ‘Inside Dead Space #1: Remaking a Classic‘ the blog seems to be the first of what we hope will be a regular series offering some additional insight – following a series of livestreams over the course of the year.

It certainly sounds like the remake won’t slavishly follow the original, and in fact the team say they’re looking to the subsequent games as they retool certain aspects for this revisit.

As Senior Producer Philippe Ducharme details; “The story, for example, hits all the main beats and events of the original. But we looked at the lore of the whole franchise, which is a lot wider than the original game.”

“There was Dead Space 2, Dead Space 3, the comic books – these all added additional lore that we re-injected into the game.”

An example they give was the decision to give Issac Clarke his voice. In the original 2008 game, our protagonist was a silent hero. However, the remake sees Gunner Wright reprise his role from the second two games in the trilogy.

As well as fleshing Clarke out, some other characters who’s voices we did hear will be getting the reverse treatment, as revealed by the game’s creative director Roman Campos-Oriola.

“Some characters who were a bit more secondary, who only appeared in audio logs, like Dr. Cross – we gave them some actual screen time.”

Perhaps most excitingly, we’ll also get to see more from side-characters like Nicole thanks to “a whole layer of narrative side-quests” that will allow you to see what happened to them during the original outbreak of the Necromorphs.

It makes for some tantalising reading; and hopefully we don’t have too much longer to wait. The Dead Space remake is set to arrive on Xbox Series X|S, PlayStation 5 and PC on January 27, 2023. 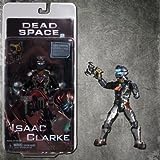