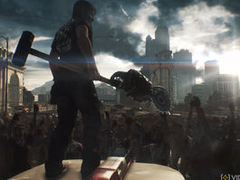 Dead Rising 3 will call your phone to deliver mission objectives

The functionality relies on the use of Microsoft’s second-screen technology Smartglass, which the upcoming Xbox One game will use to “skin your phone to be like the phone from the game’s universe” and simulate a phone call to deliver exclusive missions.

“After you launch the app, it notices that Dead Rising is currently being played, press a button, and in kicks our phone,” said Bridge (via Siliconera). “It actually skins your phone to be like the phone from the game’s universe.

Players will even be able to customise the phone’s ringtone.

“‘Personally, I’m a child,” Bridge continued, “I love gadgets, hearing a little ring… I can even customize the ringtones too… and hearing a little voice, that gives you exclusive missions.”

If you’re worried about missing out on content linked to the main story, though, don’t be. Bridge assures fans that the missions delivered through Smartglass are completely separate to the core narrative, and that you’ll be able to finish the game without it.

“[The Smartglass character’s] storyline is his own,” he adds. “And it interweaves with the main storyline. Without it, you’re not losing out on what the story is. But you’re getting more out of the game.”

Smartglass will also allow players to call in military support, including air strikes, from any compatible device.

Dead Rising 3 is due to launch alongside Xbox One this November.

The same tech would work wonderfully in GTA 5. Go on Rockstar, you know you want to…