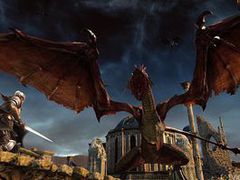 Dark Souls 2 is heading to PlayStation 4 and Xbox One next year with improved graphics and additional content, Bandai Namco has announced.

Releasing in Europe on April 3, 2015 and in the Americas on April 7, 2015, Dark Souls 2: Scholar of the First Sin will include the original game plus all three previously released DLCs – Crown of the Sunken King, Crown of the Old Iron King, and Crown of the Ivory King – along with additional tweaks that take advantage of current-gen systems.

Both platforms get “additional upgrades to graphics, sound [and] performance,” and an “increase in maximum online players in [a] single session”, raising the online player count to 6.

The game will also be available on Xbox 360, PlayStation 3 and PC. But while the last-gen versions won’t feature any graphical improvements, all five versions will feature additional NPCs “for an enhanced story experience”, “parameter adjustments for improved game balance”, “augmented item descriptions” and “improved online matchmaking functionality”.

PS3, Xbox 360 and PC owners who own the original version will be able to download the new content for free as part of a “large-scale” content update.

What isn’t clear yet, however, is whether the PS4 and Xbox One versions will make use of the lighting technology removed from the last-gen games.

Dark Souls 2 was criticised by fans earlier this year for its apparent visual downgrade, with the last-gen versions appearing radically different to gameplay footage released by Bandai Namco prior to release.

At the time, both Bandai Namco and FromSoftware attributed the changes to a “delicate balance” between gameplay and graphical quality.