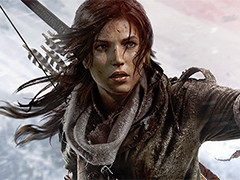 Crystal Dynamics has discussed the improvements made to the technology powering Lara Croft’s hair in this November’s Rise of the Tomb Raider, explaining how her hair will now accumulate snow and float in ‘zero-gravity’ while swimming underwater.

“We definitely believe the hair technology we developed with AMD [for Tomb Raider 2013] was a foundation for the way we believe hair will be rendered in the future video game graphics. And, as pioneers of this – there’s not many people to look at for reference other than films – we have been pushing that technology to find ways to make it even better,” game director Brian Horton explained in an interview on the official Tomb Raider Tumblr.

“And we have been developing techniques to allow us to have more hair but less physics. The hair is now in clusters, so the way hair naturally falls is that hair wants to be next to adjacent hairs that create shapes. Now, the hair splines can follow these guide hairs and these formerly physics-grown hairs, so it feels a little bit more natural when it moves.

“That’s one of the evolutions, and in water we now have the ‘zero-gravity’ effect; so, when she goes underwater, her hair will float and it’s important – when it comes out of the water – it will feel heavier and feel more clumped and obviously look wet and darker, so all these things, including snow and the snow accumulated in the hair, that we’ve been incorporating into our technology.”

The PC version of Tomb Raider 2013 famously applied TressFX technology to Lara’s hair, allowing thousands of individual strands to react realistically to wind and rain. The tech was improved even further for PS4 and Xbox One’s Tomb Raider: Definitive Edition the following year.

To check out what it looked like back then, take a look at the video below.

Rise of the Tomb Raider launches on Xbox One and Xbox 360 on November 10. Other formats have yet to be announced.