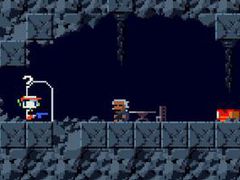 2D indie platformer Cave Story is to be remade for the 3DS, publisher NIS America has announced.

As well as remaking the original in 3D, with new character designs, Cave Story 3D will include brand new content. The 3DS release will be the first time Cave Story will be available to buy at retailers as a physical release, with all previous versions being download only.

And what of a proper sequel to the original game? Cave Story creator Daisuke Amaya is confident we’ll see one.

Cave Story is widely considered a classic of the 2D action platforming genre, so news of the game coming to new platforms is always good. How it’ll work in 3D with redrawn graphics remains to be seen.