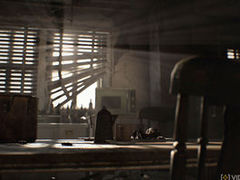 Capcom Europe CEO: ‘Resident Evil 7 VR is a bit too scary for me’

Capcom’s European CEO has admitted that he finds playing Resident Evil 7 in VR “a bit too scary”.

Speaking in the latest issue of MCV, Katsuhiko Ichii suggested that he might have to play the game through on a standard television after being spooked by it running in VR.

Resident Evil 7 was announced at last month’s E3 and is scheduled to arrive on PS4, Xbox One and PC in January, with support for PlayStation VR.

“When creating the game, the entire development team approached it as a normal non-VR game, and put in plenty of frightening jump moments,” added marketing director Antoine Molant. “Having said that, obviously from a testing standpoint, we are making sure we are not putting people in danger for real.”

A playable demo of Resident Evil 7 is available to PS Plus members now on PS4. It isn’t yet known whether it is due to arrive on other platforms.