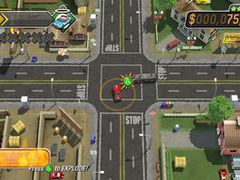 Top-down smash-em-up Burnout Crash!, which arrived on XBLA and PSN last month, is due for release on iOS devices before the end of the year, EA has revealed.

“The game’s super simple controls make it perfect for a mobile platform and it will give Burnout fans a chance to take the fun of Crash mode with them wherever they are.” said Richard Franke, creative director on the game.

The iOS offering will take advantage of touch-screen controls as oppose to tilt, and feature the same three games modes, 18 junctions, and six locations from the XBLA and PSS version.

I gave the game a 7 in my review, describing it as “everything a downloadable title should be: simple, addictive and well priced.”

There’s no date or price attached to the iOS version at this stage, but EA has confirmed it’ll be out in time for ‘Holiday season’, and thus will see a release before the end of the year.