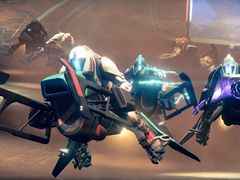 Destiny fans are desperate for details on future game updates, and whilst Bungie isn’t ready to announce anything right now, community manager Eric Osborne has offered some information which indicates at least one large scale drop is coming in 2016.

In an effort to calm fans, Osborne took to the Bungie blog to explain what’s happening.

“To put it bluntly, you seem worried that there won’t be any more substantial content until we ship another full game, or that all of the content for the rest of Year Two will come in the form of timed events,” he wrote.

“There’s a whiteboard in one of our meeting rooms filled with scribblings and sticky notes that represent the developments planned for Destiny’s not-so-distant future. Events, activities, content, and features designed to keep you happy, entertained, and rewarded throughout the year to come: some events and some activities that will become additions to your Director.”

Early 2016 will see the release of a small scale experience similar in scope to the recent Festival of the Lost. This will be followed in the spring by an update “far larger than anything you’ve seen since the release of The Taken King”. In the same release window you’ll also get “another significant update to the world and sandbox,” explains Osborne.

“I’d love to announce it all right now. On Twitter, even. It would do wonders for my follower count,” says Osborne, “but since the team is currently in development on those projects, it would also be irresponsible.”

If you’ve yet to get into Destiny then PS4 players have a great opportunity to jump in thanks to the special price of under £25 on PlayStation Store for the complete game including The Taken King.