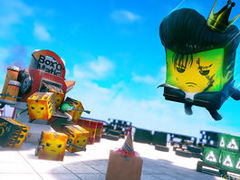 The game is described by the developer as a “90s style 3D platformer” that sees players delivering cardboard boxes across a variety of 3D worlds. Prospect has previously said that the game is inspired by classic PS2 rolling game Katamari Damacy and N64 platformer Super Mario 64.

PS4 and Xbox One release dates are still to be confirmed, although you shouldn’t expect to see them until 2017.

“Unbox is 3D platformer where the player is a cardboard box who must bounce and roll, through mountains and islands alike, to deliver themselves for the greater good of the Global Postal Service, or GPS,” says Prospect. “This can include racing against a clock, solving puzzles, and a lot of fun with physics, which often involves causing mayhem by knocking things over or blowing them up. The game also has a strong local multiplayer element, for full split-screen enjoyment, including a variety of different challenges.”

For the latest screenshots head through here or take a look below for a new trailer.