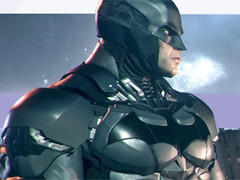 Batman: Arkham Knight’s Gotham City is “roughly five times” larger than the one built for Batman: Arkham City, Rocksteady has revealed – although according to the developer, it isn’t just about the size.

“As we’ve said before with Arkham City, it’s not about the scale as much as the detail,” game director Sefton Hill explained in the latest issue of Game Informer. “We want to make sure the world is rich and full of interesting things to do. We’re not trying to create the biggest open-world game ever. We are trying to create a really rich, vibrant, dense open world.”

Arkham Knight’s introduction of the Batmobile has also led to a “complete rethinking” of Gotham, the magazine reports, with ramps, barriers and even other cars used to provide additional hazards.

More thugs litter the streets, too, with between three-four times the amount of enemies roaming Arkham Knight’s Gotham than Arkham City’s, while additional open space between buildings makes gliding better than it’s ever been before.

“Arkham City was quite claustrophobic,” Hill says. “Here we have a lot more negative space between the buildings so it’s much easier and more enjoyable to glide around.”

Batman: Arkham Knight was announced earlier today and sees Batman returning to face some of “Gotham’s most feared enemies”.

The game is due to release on Xbox One, PlayStation 4 and PC later this year.