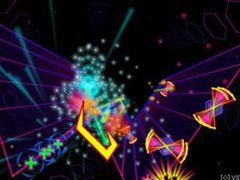 Update: Atari has said in a statement that it “values and protects its intellectual property and expects others to respect its copyrights and trademarks”.

The firm added: “When Llamasoft launched TxK in early 2014, Atari was surprised and dismayed by the very close similarities between TxK and the Tempest franchise.

“Atari was not alone in noticing the incredible likeness between the titles. Several major gaming outlets also remarked at the similarity of features and overall appearance of TxK to Tempest; one stated of TxK, ‘This is essentially Tempest’. There is no lawsuit. Atari has been in continuous contact with the developer since the game launched in hopes that the matter would be resolved.”

Minter contradicts much of what Atari has said, stating “they never gave an inch and just continued with threats and bullying. Specifically they had their lawyers present a number of legal accusations about a variety of things; we consulted a lawyer who told us that if we wanted to fight against it then it’d be expensive because we’d need to address separately each of the things they were accusing me of”.

Atari has also requested the existing PS Vita edition of TxK be withdrawn from sale.

Original Story: Development of Llamasoft’s shooter TxK has been cancelled after Atari hit the project with a copyright claim, creator Jeff Minter has revealed.

“So yeah all the stuff we had ready or near ready will now never see the light of day,” Minter announced on Twitter. “No TxK PC, PS4, Oculus, GearVR, Android. Thank ‘Atari’.

“It’s achingly sad because I *loved* Atari. Getting to work there, and creating one of their last great games, was such a joy for me. The old icons fall, it seems: Atari become copyright trolls, Nintendo now going F2P it seems…

“I got my dad into games using a VCS (Atari 2600), and on his last ever holiday I was so happy to be able to show him round the ‘bunker on Borregas’. And I was there when it died, and that too was a terribly sad time.

“But I could never have imagined one day being savaged by its undead corpse, my own seminal work turned against me. I am beyond disgusted.”