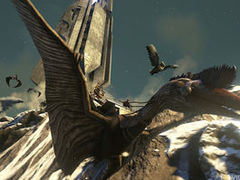 The full release of dino-survival game ARK: Survival Evolved has been delayed to holiday 2016, Studio Wildcard has announced. The game had previously been due to launch in full on PS4, Xbox One and PC this June.

The game has already sold around 5 million copies in Early Access, however, selling over 1 million copies on Xbox One and almost 4 million units on PC. The early access version has not been released on PS4.

The final version’s delay means that more content will be delivered at launch than the studio had originally planned, including support for local multiplayer, modding and over 100 dinosaurs now set to be included at release.

“ARK’s success has increased our content goals and Early Access players have helped us raise our ambitions with their invaluable feedback,” said Studio Wildcard co-founder Jesse Rapczak. “When we first announced, we said 70 dinos, now we’ll have over 100. We never anticipated adding modding, local multiplayer, split screen, or numerous other upcoming features. The game at launch will be far more robust than originally conceived, but it takes a little extra time to wrap it all up.”

The delay follows days after Studio Wildcard announced that ARK spin-off Survival of the Fittest is due to hit PS4 this July.