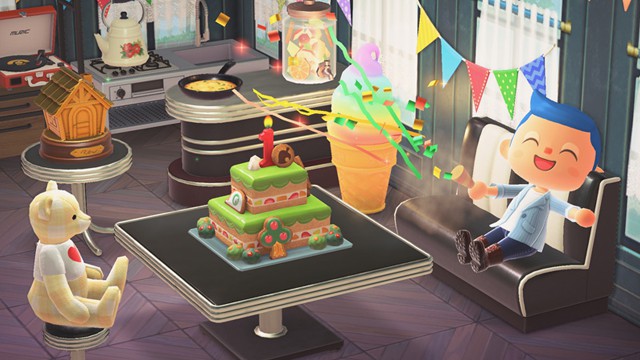 Nintendo has detailed the contents of the next update for Animal Crossing: New Horizons which will mark the first anniversary of the game’s release, including improvements to custom designs and a new Island Tour Creator to show off your island.

As detailed on Nintendo’s website, the update lands tomorrow and right off the bat will give players a free anniversary cake as a thank you gift, and new seasonally appropriate items such as a Whoopie Cushion (for April Fool’s Day), prom themed items for April, a Forsythia tree for Tree Planting Day (April 1- April 10) and a Cool Globe for Nature Day. (April 15 – April 22) — players with an active Nintendo Switch Online subscription will also be able to get a Nintendo Switch Lite from Nook Shopping.

Meanwhile, custom designs get an upgrade, with Resident Services offering a Custom Design Pro Editor + upgrade offering 100 additional slots (50 of those for standard Custom Designs and 50 for Pro Designs) which you’ll likely need as you can now add custom textures to umbrellas, small flags, uchiwa and photo stands. In addition, you’ll be able to nab an upgrade that allows you to access the Custom Designs Portal directly from your NookPhone rather than having to go to the Able Sisters shop every time.

The game’s infamous Bunny Day event will also make its triumphant return on March 28, with a few tweaks to make it better than last year’s effort with new items added and the ability to buy certain items from Nook’s Cranny. Finally, a new feature that will allow you to create screenshots and videos of your island into a sort of shareable mini-holiday brochure for your island called Island Tour Creator will go live on March 24.

Nintendo of Europe has also recently announced (thanks, GamesIndustry.biz) that Animal Crossing: New Horizons has become the company’s fastest selling game in Europe, with more than seven million copies sold since its launch in March last year according to Nintendo’s press release, with them claiming the game is now owned by a whopping one-third of all Nintendo Switch owners in Europe. Not bad at all.

You can check out the full details of the Animal Crossing: New Horizons first anniversary update over on Nintendo’s website.