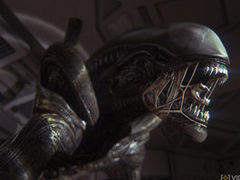 Alien: Isolation will be ‘close to 15 hours long’

“We’ve re-recorded large portions of the original score because obviously the film is only a couple of hours long,” lead designer Gary Napper told PlayStation Access. “Our game is close to 15 hours, really, so we need a lot of different music for a lot of different situations.”

But Napper promises that Isolation won’t just be 15 hours of Amanda Ripley being killed over and over again, with the Alien adapting to to the player’s actions throughout the course of the game.

“[The Alien] takes things into account like whether it’s seen you before, if it recognises you,” he explains, “we match that against the gameplay because very early we found we’d made this perfect killer, and if it found you every time and killed you there wasn’t much gameplay there.

“So we do things like, when it first sees you it turns and hisses, and if it hasn’t seen you before it tries to make out what you are. If you’re quick to go away then it’ll just search over where you’ve been and we extrapolate that out for the rest of the game and the other mechanics.”

Alien: Isolation won VideoGamer.com’s coveted ‘Most Likely To Help Us Forget About The Impending Heat Death Of The Universe‘ award during E3 last week, and Steve thinks it has the potential to do “the franchise justice”. And that’s high praise from him.

Look out for more in the run up to launch on October 7.