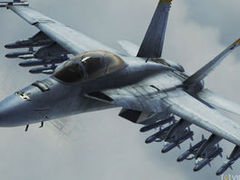 The game will be available to download directly from PSN and feature a story campaign and co-op multiplayer. Competitive multiplayer “will arrive shortly after the game’s official launch”.

Infinity had previously been due to launch last year, but was delayed to “provide a better quality product”. The game forms a part of Namco’s new range of free-to-play titles, alongside Ridge Racer Driftopia, Tekken Revolution, SoulCalibur: Lost Swords and Rise of Incarnates.