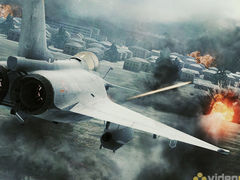 Ace Combat Assault Horizon will be released for PC in Q1 2013, Namco Bandai has announced.

The PC version will arrive in Q1 2013 – in stores and digitally – with the game targeting PSN on November 28 and Xbox LIVE Games on Demand on December 18.

The game earned an 8/10 in our review back in October 2011, and was praised for making the combat flight simulator cool again.