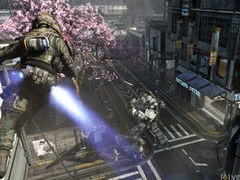 Around 2 million people had taken part in the Titanfall beta by the time it wrapped up last Tuesday, February 19, Respawn has revealed.

The figure was announced by community manager Abbie Heppe, who explained to Polygon that gathering player feedback throughout the beta was “really addicting”.

“You almost don’t want to sleep,” she said, “because you want to constantly monitor and know what’s going on. My adrenaline levels, while it was going on, were so high that even if I wanted to sleep, I just couldn’t.”

The beta opened to select players on Friday, February 14, opening up to all players two days later on Sunday, February 16. It closed three days after.

But despite the beta offering the opportunity to stress-test the servers, Respawn can’t guarantee that the full game will launch without issue.

“You never want to say that everything is going to be perfect,” added Heppe. “Obviously there are things that can change. But you don’t want to say, ‘oh, no, there will still be problems,’ because you don’t want to give people a lack of confidence in what you’re doing.

“I think that this beta was really about giving people confidence that not only will we be communicative with them, but we’re actively trying to work out any bugs now.”