Titanfall weapon guide – how to use the Smart Pistol MK5 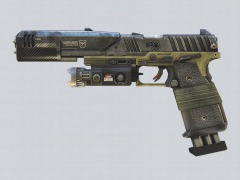 Titanfall’s Smart Pistol MK5 is one of the coolest weapons to be introduced in an FPS for a very long time. The handgun can lock onto targets and take them out at rapid speed. It can acquire Grunts and Spectres quickly, but using it to take down Pilots can be tricky.

Knowing how to be most effective with the Smart Pistol is important to becoming a top Titanfall player, and VideoGamer.com has some top tips to help you rack up the kills on the battlefield.

As is the general rule of Titanfall, you have to keep moving to avoid enemy fire while you target your enemies. Strafe and jump while keeping opponents in your sights to grant yourself those vital few extra seconds to lock-on.

The gun will zap to grunts and spectres almost immediately. Grunts will take one shot, while spectres take two or three.

The MK5 is very effective at killing grunts and spectres, but not so good at killing Pilots, thanks to the long lock-on times for each round.

Your main job will be mopping up AI while using the Smart Pistol. Unless you have used an “Amped” burn card, it can be very difficult to take out players, who can quickly turn round and mow you down.

Remember you can use a burn card at the very beginning of a match by pressing Y (on an Xbox pad) while in the dropship.

Don’t pull the trigger as soon as the MK5 locks-on once; if there are several enemies in the same area, wait until you’ve targeted all of them before shooting and snap up all of those kills.

Use the right loadout

Make sure your loadout compliments the MK5. Cloak or Active Radar Pulse should be your tactical ability to give you the best chance of sneaking up on Pilots and giving you more time to target them, while arc grenades are perfect for throwing into crowds to disorientate then quickly pick off.

Go with Enhanced Parkour as your tier one kit, but switch to Run N Gun once you unlock it. Tier two should always be minion detector, allowing you to spot enemy AI on your mini-map and quickly dash round and get easy kills.

Once you reach level 26 (which, in Titanfall, doesn’t take very long at all), you’ll unlock the B3 Wingman, which is a very powerful revolver. This works well alongside your Smart Pistol for when enemy Pilots get too close, and it can be difficult to get a lock-on. The Revolver acts as a handheld shotgun and can help clear small rooms of enemy clusters.

The RE-45 Autopistol is good when you’re a low level thanks to its rapid fire, giving you a good chance to even the odds when stuck in a room with a Pilot.

After fulfilling certain criteria, mods will unlock for the gun that you can equip:

– Killing 25 enemies with the Smart Pistol will unlock the suppressor.

Although the MK5 has a small clip (12 rounds), it doesn’t take many bullets to kill enemies, making the other two perks the best options.