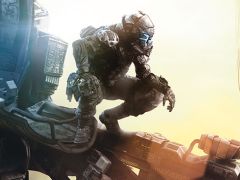 Titanfall: Beginner’s guide to ranking up

This may sound counter-intuitive, but it bears repeating: get out of the damn titan. Yes, it’s a gigantic walking death machine with more firepower than the US military, but it’s also extremely visible and, as such, vulnerable.

There’s a reason your titan can be set to guard or follow you when you’re not in it, so use these options wisely. In Hardpoint games, setting your titan to guard mode can keep the other team from capturing the node. In Attrition, having the titan follow you can help mop up grunts while you hunt pilots.

A lot of players seem to have already realised this, using their mechs as expensive distractions, but if you’re insistent on staying in the thing, make sure you choose the right one…

So, you’ve decided to stay in your gigantic armoured coffin. Fine. But don’t start thinking that just because you’re rocking an Ogre (the heaviest, strongest type) that you’re invulnerable. To most players, you’re now just a slow point-giving machine, especially when you factor in that the titan’s optics don’t pick up cloaked players very well. Soon, you start to take pilot fire as well as damage from other titans, and have to eject in shame.

Or, you can choose the Stryder, which is lightly armoured but moves much more quickly. Using sprint, dash, and a combination of defensive options such as the vortex or anti-matter shields, you’ll take little damage and still give out a fair amount.

This isn’t to say the Ogre doesn’t have its uses, of course. Just be aware that if you’ve got a team of Ogres, you might get boxed in quicker than that guy with the Active Radar Pulse calls in his titan.

All the gear, no idea

If you do want to spend a lot of time on foot – and we don’t blame you – then make sure you tailor your gear appropriately. This may sound obvious, and it is. But the amount of people I see running around rocking default load-outs would make me sad if I didn’t enjoy killing them so much.

As an example, the cloaking device is a great tool for infiltration in objective-based games. It also works well against titans and particularly poor pilots. But why are you using it to camp a hardpoint you need to control? It doesn’t last long enough to stop people seeing you when they’re in.

Instead, use the Active Radar Pulse, which is far better suited to the job. Pressing LB will show you the location of foes on the battlefield, through walls and other terrain. It’ll also give you near real-time updates on their positions with each pulse, invaluable for zeroing targets and keeping/taking objectives. Titanfall might be a game about speed, but it’s also one about strategy.

Getting off the ground

Knowing the maps is one thing, knowing how to cover them effectively is quite another. One golden rule I follow is to get off the ground as quickly as possible. This a) stops you being literally stomped and b) gives you access to intricate running routes and c) gives you a clearer view of the battlefield.

The last point can be vital from a titan-hunting perspective, giving teams the edge when it comes to winning games. This is especially handy when it comes to the Last Titan Standing mode, where you can abandon your mech in guard mode in a safe-ish location and head out to take down everyone else. It’s not foolproof, but it might win you the game while everyone else focuses on taking down the other robots.

Taking to the walls and walkways above also has another use: it enables you to clearly see which enemies are actual pilots, and which are bots. Most human players, after all, don’t move like AI, instead flying and swooping like birds gone mad on crack. This is especially useful in Pilot Hunter, but if you’ve ever been killed because you ran into a group of foes and killed a bot instead of a human, then you’ll know it’s useful in most modes.

It can be tempting, when killed, to simply hammer away at the pad, trying furiously to get back into the game as quickly as possible. Doing so, however, will see you pass up an opportunity to change your luck via Burn Cards.

Essentially single-life perks, they come in a variety of types affecting everything from movement speed to weapon power to the time it takes you to call in your titan. You can only take a set number of them into games with you, and you can only have a set amount in your ‘deck’. Fail to use the ones you have and you’ll stop yourself from acquiring any more, meaning you might not have multiples of the ones you need for upcoming matches.

Like with the rest of your gear, taking the correct Burn Cards into battle could swing it: I prefer to take in one that boosts my primary weapon’s power, one that increases movement speed, and another that gives extra ordinance.

That said, if you’re playing CTF, then get three bionic legs cards and have at it.

Soon, YouTube/Twitch will be filled with videos/streams of players wall-running and double jumping like crazed spiders attempting to escape a bath made out of something that really scares spiders. In fact, it’s probably already happened. As such, there’s no excuse not to hunt out the best route around maps and exploit them to your own ends. Angel City has some great running routes, which can be combined with the use of your knife (to hold you firm against a wall) and your single boost jet pack to to get from rooftop to billboard to window.

Don’t go thinking that just because you’re not high above the ground you can’t utilise these powers: smart players will wall-run and jump anything to escape, and you should too.

So, you’ve smashed the other team and sent them scurrying away to the extraction dropship. What next? Follow them on foot? Put your titan in guard mode at a choke point to take them down?

Yes and no. Yes, because it’s fun to kill players while they’re on the run. No, because instead you and your team should use your titans to take out the dropship itself. It’s tricky, requiring some coordination and timing, but if you can get three or more friendly titans on the field when the epilogue kicks off you’ll be in with a great chance of taking it down. Keep firing at the ship as soon as it lands to the moment it begins to take off and you should do it. There’s nothing more frustrating for the other team than making it to the chopper and still getting ruined.