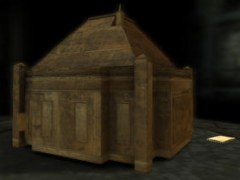 Look up and slide the metal bar out of the lock. Double tap the door to knock it over. On the table is a wooden box. Slide the metal plaque on the front to the right so that it slides down, a switch will appear. Flip the switch to receive a small token. Take the gold tower from the top of the box.

Zoom out, to the left is a crossbow, zoom in and take the small wooden handle. Go back to the box and place the handle in the slot on the right hand side of the box (with the different symbols on it). By moving the handle up and down, slide the squares with symbols on into the corresponding slots. Take the trigger mechanism.

Zoom out. To the left of the crossbow is a chest on the floor and a square on the floor covered in dust. Rotate the hand of the chest and pull it out to take the length of string. Go back to the crossbow and place the string, mechanism and metal bar onto it. Take the crossbow bolts from the hidden compartment.

Take a crossbow bolt and place it onto the crossbow. Pull back the string. Shoot the bow into the eye of the statue to the left by pushing the golden latch across. This reveals a broken mirror, a blue box and letter.

On the blue box, place the token in the bottom left square. The aim is to get the blue token to the top right without running into the opposite piece. It is impossible to do so without manipulating the middle square using the switch on the side of the box. Both tokens take turns making moves, so plan ahead and try to move the skull to the far side, away from the exit. Once you’ve beat the coin, take the small key.

Use the small key on the chest by the trail of ash. Turn both keys to slot the lock together. Open the chest and take the large stone block. This is the tip of a hammer found below the broken mirror. Place the hammerhead stone on the end of the wood, wind the crank and pull the lever until the concrete slab is smashed. Take the shard of glass and put it into the mirror. At the top of the mirror, input the symbol that looks like a J’ on the left and the two arrow heads pointing down-left on the right.

The box will now change to the one that is in the reflection. Add the gold tower from your inventory onto the second floor of the new box and take the ornate, ancient dagger.

On the front of the box, slide the door at the top to the left. Use your eyeglass to match the green lines to make a door. once you move into the next room, look down-left to view the next doorway. This will reveal another two symbols, one that looks like two ‘c’s’ on top of each other and the the other a leaning crucifix. You need these symbols to get the original box back on the table. Input these symbols on the mirror and place the dagger on the top of the box.

Take the straw effigy and small gem. Go back to the mirror and switch the boxes again. Place the gem into the slot on the back of the box, press the two gems either side of the bottom right gem and the top left one to open the back panel. Take the piece of flint.

Place the straw effigy on the slot of concrete next to the chest and the piece of flint on the metal next to it. Ignite the effigy. Go back to the crossbow and shot a bow into the newly revealed sandbag. Take the star shaped metal object and place it into the slot in the chest where you received the stone hammerhead. Close the lid and re-open it to receive a metal shard.

Place the metal shard on the front of the temple. Rotate the lock until it frees the green circle. Rotate this until the symbols match. Take the skull and place it on the gold plaque in the corner of the room. Rotate the handle below the wall to crack the skull open. Match the symbols on the box by sliding the top.

To match the final symbol to reveal the door through the eyeglass, move around until you can see the crossbow, the mystery shape should be just above it.