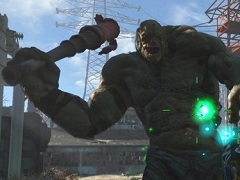 How to fight the two-legged enemies in Fallout 4 and the strengths and weaknesses to watch out for.

The enemies you meet in Fallout 4 are varied, and each have different strengths and weaknesses you can exploit – if you know how. After reading this guide to the humanoid baddies you meet you will! Simple, right? We’ve included robots in here as humanoid because they have arms and legs, and that’s close enough. We’ve done a guide on how to fight the mutated creatures in Fallout 4 too.

Ghouls are radiation burnt humans who used to be normal people and, depending on who you ask, still are. You’ll meet a bunch of ghouls out and about who’re just regular folks trying to carve out a life for themselves, but feral ghouls will try and claw your throat out.

Most ghouls are unarmoured but, like super mutants, they’re resistant to radiation, so concentrate on other forms of damage. Melee attacks can interrupt a ghoul’s strike and shooting a ghoul’s leg out will often stop it from attacking you altogether.

How to fight ghouls in Fallout 4

Ghouls can be a tough fight early on. A lot of the time they’ll be lying on the floor waiting to be disturbed, so it’s easy to mistake them for dead bodies (although dropping into VATS will highlight them as potential targets). They get up to a fair lick of speed when they lunge at you and there’s always more than one, so be careful to not get overwhelmed. It’s best to hit them from range and make good use of VATS to keep tabs on them all. If they do manage to hit you then you’ll get rad damage, which is really annoying apart from anything else.

There are a couple of types of high level ghouls that have ramped up damage and resistances, but the most annoying are the glowing ones (that’s literally what they’re called). They emit radiation generally, and can produce an area of effect radiation attack that also heals nearby ghouls. Try and lob something like a frag grenade at them before they’ve realised you’re there.

Raiders are humans, like you, but rude unpleasant ones that shoot on sight. While raiders aren’t a faction, per se, they do form gangs (the largest and most organised being the Gunners).

Raiders are squishy bags of blood and water like yourself, so they don’t have any high natural resistances and the armour they wear doesn’t add that much. Eventually you’ll begin running into the odd raider in a suit of power armour, which gives them much higher resistances and is something to keep an eye out for.

How to fight raiders in Fallout 4

Raiders aren’t too tough, but you’ll never find one of them on their own. The more entrenched raider camps will usually have machine gun turrets and lights, so try using a quiet approach. If you have a silenced sniper you can pick off a few of the raiders and lights at a distance, and masters of stealth can sneak in and turn off the defences by hacking terminals – you can even take any power armour out of the equation by pickpocketing the fusion core. If that isn’t your style chucking a few grenades ahead of yourself and laying the place to waste is usually alright, but take out the turrets first as they’ll deal the most constant levels of damage to you.

There are a few varieties of robots; you’ll most common find Protectrons, which are usually in their stations waiting to be activated. Robots are pre-war and therefore a bit retro and adorable, but they can still be dangerous.

When facing robots energy damage is your friend, as they have high ballistic resistance and aren’t susceptible to radiation. Unlike other humanoid enemies a robot’s weakest point is their torso area; logic does suggest this is where the bulk of their vital components would be.

How to fight robots in Fallout 4

You’ll mostly come across Protectrons, which you can hack pretty easily to help you out and are pretty slow and stupid, but have quite powerful laser weapons – and if you start attacking anything in their general vicinity they’ll often view you as a threat and turn on you too. There are also militarised versions of the Mr Handy robots (called Mr Gutsy) who are nasty at close range but easy to take out.

Sentry bots and Assaultrons, however, are both much faster and more deadly. All robot types have weaponised arms, so taking those out is a good start, but destroying an Assaultron’s legs will render it less dangerous. It has a devastating charged laser attack telegraphed by its head glowing red, but you can interrupt that by doing enough damage to it.

If you’re fighting a mixed group of enemies try to destroy the robots first, and keep moving so it’s harder for them to target you.

Super mutants in the Commonwealth are humans that have been exposed to an evolutionary virus by the Institute and then dumped back out into the world. They’re big, green, and aggressive, like shithouse versions of the Hulk that don’t turn back into nice, non-threatening Mark Ruffalo.

Rule out using irradiated weapons, because they’ll do nothing to super mutants. Energy weapons like laser muskets work well, and you can use sufficiently advanced ballistic weapons too, but they’ll do comparatively less damage. Headshots are effective against all super mutants, but have low success rates even in VATS (presumably due to their heads being so small in relation to their bodies).

How to fight super mutants in Fallout 4

Super mutants use a mixture of ground troops with melee weapons and others with ranged weapons higher up to get a bead on you (and usually at least one with a rocket launcher). Try and draw out some of the melee guys to dispatch them away from the ranged attacks, but watch out for super mutant suiciders who’ll run at you with a mini nuke strapped to their arm. You can shoot the nuke to explode them at range and take out any other targets they’re next to, or kill them without hitting it to get the nuke as ammo for yourself (listen out for the high pitched ticking that indicates if there’s one hanging around).

You might want to break out the big guns – rocket launchers and the like – for higher level super mutants like butchers and overlords. Super mutants have poor perception and intelligence so it’s easy to back off, lose them, and then come back in for another round when you’re ready.

Synths are the uncanny valley made flesh: complex robots approximating human form, with varying degrees of success. Synths do not appear as commonly as other enemy types, but you’ll run into them in a lot of the story missions. Although for all you know everyone in the Commonwealth has been replaced with the more advanced synths and you didn’t realise.

Although synths are equipped with energy weapons they’re weak to energy themselves, being, as they are, mostly circuitry. Their armour can give some high radiation resistance, but strong ballistic damage and pulse explosives work too.

How to fight synths in Fallout 4

Synths are usually in teams but they spread out over an area and can flank you without you realising, so try and keep an eye on your mini map. You can shoot the limbs off the weaker synths to make them less of an issue, but they’ll still crawl at you until you put them down properly if you shoot their legs off, which is a somewhat harrowing experience.

The most deadly synth variant is the Courser, which looks a bit like the Terminator and was designed to search and destroy. They have higher resistance and damage than other synths, and will use stimpaks and stealth boys in a fight. A good bet is to lob a grenade in their general direction so they cop a load of damage in one go.