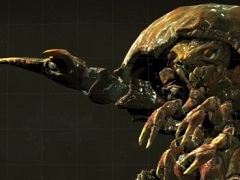 The Commonwealth didn’t pass through a nuclear war unscathed and after 200 years there are now some hideous monstrosities roaming around, all of which have high resistance to radiation because they were born from it. This guide will give you tips on how to kill them with extreme prejudice. We haven’t included info on how to fight the insect enemies like radroaches, dogs, or non-threatening animals such as brahmin. That guide would be “Just, like, bloody smash ’em, mate?” and if you can’t kill them on your own then frankly there’s no helping you whatsoever. Please see here for our guide to fighting the walking talking humanoid enemies.

These apparently started off as chameleons but have been mutated to the point that they now resemble dragons without wings, but “chameleon dragon lizard thing” isn’t as catchy as deathclaw.

Deathclaws are incredibly heavily armoured so will resist a lot of damage of all types, especially energy and radiation. This includes their heads, which take minimal damage as well; the weak spot on a deathclaw is actually their soft, unarmoured tummy.

How to fight deathclaws in Fallout 4

Deathclaws are fast, and they can catch you and impale you through the chest in a one hit kill, which you can only really resist if your armour is strong enough. So, you know, don’t get caught.

They don’t expose their belly much, but you’ll get a couple of opportunities: occasionally it’ll stand on its back legs to roar mightily at the sky before charging and, if you can hold your nerve, just before it hits you it’ll raise its arm to strike. Going for the second option can be risky. You’ll need to use VATS and have a powerful enough weapon to stagger it after the hit, or it’ll keep coming for its attack and smack you sideways. Melee characters are going to have a harder time of it, but if you can find a weapon with a stagger buff that helps. In any case, just keep attacking and throwing explosives. And never stay still for too long.

Mirelurks lurk in mires, or, more generally speaking, on the coasts (including lakes and rivers) where they burst out of the wet mud with no warning. They’re basically big crabs with far too many legs, and they make a clicking noise when they walk so you know if one of them is following you.

Mirelurks are have a big armoured shell like an overturned soup dish that protects them from a lot of damage when they’re on the move. Their weak point is their head but that’s often hidden under the shell too.

How to fight mirelurks in Fallout 4

As mirelurks don’t poke their heads out that much you can try crippling their limbs to slow them down and reduce the damage they do – their claws have a hefty whack to them. It’s easiest to get a headshot on them when they’re rearing up to attack, so you need to either wait for them to go for you, or send in someone else as bait. The mirelurk hunter variant, which looks kind of like a terrible lobster, is even harder to get a decent headshot on, and you’re better off taking their legs out first from a distance if you can.

This all pales in comparison to the mirelurk queen, however, which is massive, can spawn mirelurk hatchlings, and spits acid that drains your health quickly. You can disable the acid by crippling the little spout nubbins by her face, but they’re a small target even in VATS. Taking on a queen will probably require something like rockets or a minigun. Nukes from a fatman will work, but it’ll take a couple of them because mirelurks have such high rad resistance.

You’re most likely to run into radscorpions in the glowing sea, but there are a few of them scattered across the map as you get further out from the Vault. They’re basically giant scorpions. We don’t know how to explain it any more clearly.

The clue is in the name in that radscorpions have high rad resistance. Stick with high powered ballistic weapons, like souped up sniper rifles.

How to fight radscorpions in Fallout 4

These guys are a really good source of cooking components (especially their eggs) so you might want to actually seek them out, but be prepared that once you’re in a fight with a radscorpion it’s hard to get out of it again. They can burrow into the ground and follow you really easily to pop up out of nowhere again; one way to deal with this is to carpet bomb the general area with molotovs, so that when they do reappear they’re likely to cop a bit of fire damage. They have a nasty sting on them, and if you can take out their tail from a distance then it’ll help you out a bit and you can avoid some damage.

Yao guai are big mutated bears with poor fur coverage. They roam about the more forested areas of the wasteland looking for things to eat/tear apart with their huge paws, and will charge at you if they see you coming.

These guys can soak up quite a lot of damage, but ballistic weapons (and that includes hitting them with a big axe) will do the most to them.

How to fight yao guai in Fallout 4

Yao guai do the most damage with their claws and they have a hard hit on them, so try and stay out of reach. Shotgun blasts to the face, or melee attacks with a stagger or bleeding on them, will help you maintain some of that distance whilst taking them down. Remember to loot the bloody corpse afterwards, as yao guai ribs are a nutritious and useful ingredient to roast.