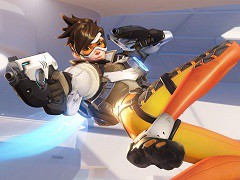 Tracer may have the least convincing cockney accent since Dick van Dyke last dressed as a chimney sweep, but she’s a fun hero to play as. You can use Tracer to nip at the enemy from behind and appear where they’re least expecting it. Her abilities are easy to learn but hard to master, so here are some tips to get you on the right track, as well as which heroes can trip Tracer up and which are easy for her to take out. You’ll be the Play of the Game in no time.

Tracer is an offense hero with short range weapons, and does the most damage when she’s up pretty close to her target. Despite that you should always avoid going in a straight head to head fight with a bunch of enemies. Tracer’s speed and her teleporting/time travelling powers make her a flanking character, so get behind the enemy barriers and pick off stragglers. If your health is low don’t be afraid to retreat, even if it means losing your target. You’re always more useful on the battlefield than off it.

Tracer has one of the fastest base speeds of the whole roster, and her weird time travel powers make her even more mobile. That being the case there’s’ basically no need for you to run in a straight line if you’re being shot at. Zig-zag, and jump to create a moving and unpredictable target for your enemies.

Tracer’s Blink ability teleports her a short way in the direction she’s facing, and how much and how well you use Blink separates the good Tracers from the great ones… It has three charges on it and they refill pretty quickly, so use it a lot, and creatively. You can jump and blink in mid-air to get to difficult places or find shortcuts around the map, and disorientate enemies as they try and follow where you’ve teleported to. Blink can also let you escape from potentially devastating attacks like Zarya’s ultimate. Blink is your friend. When in doubt, Blink.

Recall recharges much faster than an ultimate, so don’t feel like you have to save it. Recall makes Tracer invisible and invulnerable to damage while she rewinds back over the map, so it’s great for getting out of a big fight, which you’re probably not going to come out of well otherwise. You can also use Recall preemptively as a kind of advanced dodge if there’s a rocket heading your way, or you hear a “Ryuu ga waga teki wo kurau!” and just catch the front of Hanzo’s dragons.

Another very satisfying, if risky, tactic is to bait a big tank like Reinhardt into charging at you (bonus points if it takes you both off the side of a cliff) and then using Recall to get out of it. This will peel the Reinhardt away from his group and possibly even kill him.

Tracer’s ultimate ability is, basically, a sticky grenade. The fuse on it is nice and short, so when you throw one out aim at a group for maximum damage, but you should always try to land it on a member of the enemy team. It sticks to the first solid thing it hits and if that’s a piece of the environment then the enemy might be able to hightail it away; if it’s on a person then you’re going to get at least one kill. It’s also really good for taking out static turrets like Torbjorn’s, or a Bastion in sentry mode.

If you’ve got a Zarya on your team and they’ve told you their ultimate is charged then wait for that to go off before you throw out your Pulse Bomb. Zarya’s Graviton Surge will pull all the nearby enemies together, which is a nice target for Tracer.

Tracer’s Pulse Bomb will hurt Tracer herself if she get’s caught in the blast, so run in the opposite direction immediately after you chuck it. A common tactic is to zip in, throw out the bomb, then use Recall to quickly get Tracer away from the blast radius.

Overwatch heroes Tracer is weak against

Tracer has the most trouble against a McCree, with the caveat that it’s a McCree being played by someone with good aim – it’s his Flashbang that’ll stop you in your tracks and let him finish you off. Mei is also a problem because Tracer relies on mobility, and Mei’s primary weapon will slow Tracer to a standstill if she’s caught in it too long. Winston’s primary weapon should be avoided too, since it can arc right to Tracer without him having to aim precisely. The turrets put down by Symmetra and Torbjorn track you in a similar way and can take you out quickly, but depending on where they’ve been placed they can often be avoided with Tracer’s blink, or by flanking around the map, and Tracer’s ultimate is a great way to destroy them.

Overwatch heroes Tracer is strong against

Tracer is one of the heroes you can use to get behind Reinhardt’s shield, and can get out again once the fight gets too hot. She’s also good against the similarly slow tank Roadhog, flanking him easily and able to escape from his Chain Hook by using a Blink. Because Tracer is a flanking hero she’s also good for harassing a Mercy, especially since Mercy’s own offensive capabilities are low. The flanking and mobility also make Tracer good for hunting Widowmaker or

Hanzo as Tracer is harder to land headshots on, but be aware that if they do manage to it could take out Tracer in one hit.