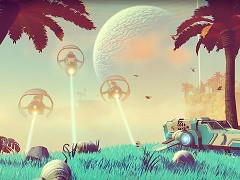 No Man’s Sky was patched on day one, and famously received a ‘three path’ aspect that provided some kind of narrative element for players to chase. Though two have been easily identified, the third remains something of a mystery. We have, exclusively, found out what it is, and broken down the steps to getting No Man’s Sky’s third ending. Spoilers ahead.

Ignore instructions from the Atlas

In No Man’s Sky you’ll continually receive messages from the Atlas, which is the massive data storage and/or AI entity that appears and offers you guidance in the game. Initially this seems like a good idea, since you start on an alien planet with a broken ship and no idea if it’s bum or breakfast time, and the Atlas represents some guidance in that situation. The Atlas will then encourage you to seek it out through the universe, and give you cryptic messages and send you to Atlas Stations along the way. Like we said, it’s tempting to get a bit of guidance, but you should ignore the Atlas! If you’ve already accepted help from it then don’t worry, the third path isn’t locked off. Just make sure you don’t follow the Atlas path right to its conclusion (you’ll know if you have).

These two dudes will appear every so often, and seemingly at random, in their ‘anomaly’ which is in reality a very small floating space station. You can talk to them for information and coordinates, in a similar, but less nakedly unsettling, way to interacting with the Atlas. Both these paths, if you follow them to their conclusions, turn out to be long-con plots set to trap you, rather than finding the other potential ending hidden in the universe. As above, talking to Nada and Polo will not lock you out from the third ending.

Find the planet with giant snakes

Even as far back as the reveal trailer we’ve seen some giant snakes crawling across a desert landscape, and we know these giant creatures are still out there. With the day one patch the team at Hello Games actually embedded the third path in with the giant snakes, and to trigger the start you need to find a planet with one. This can be frustrating and needlessly complex, because you only get the larger life forms on planets closer to the centre of the universe – this may well be a way of gating the third ending so fewer people find it, since even knowing what you’re looking for it’ll take a while.

Once you’ve hit a planet with life forms you can reasonably describe as ‘giant’ you need to keep searching along roughly the same co-ordinate lines until you find the planet inhabited by giant snakes (there will be more than one, and the snakes, since they’re procedurally generated, can vary in appearance, but when we say ‘giant’ we mean ‘large enough for several people to ride comfortably on top’). There will be other things you can look for when pinpointing the planet: it needs to be a largely desert planet, and hot. If the temperature drops below 45 degrees during the day then it’s a no go for your purposes (nighttime temperatures may vary). If a planet has more than around 15% flora that’s an indication it doesn’t have the right conditions either. Signs of civilisation, though, are good to see.

Trigger conversation with the civilisation on planet

The Gek may be present on the planet but there needs to be another humanoid lifeform there you can interact with (i.e. Gek being present does not preclude triggering the third ending, but there needs to be another civilised life form as well). Once you’ve spoken to one of them you’ll be guided to the main hub of their civilisation, triggering the start of the third path in earnest but, and this is where a lot of people fail before they’ve begun, you must spit at them to show your respect (this will be a contextual choice when you meet them). If you don’t do this then the story will not be triggered.

This next step is probably the most important. You need to spend as much time as possible ingratiating yourself in the culture of the alien race that has adopted you. They’ll give you a new name (this is procedurally generated; there is a known glitch that if it results in a name unpronounceable by the game then the story line will crash and cannot progress further, since your name will never be able to become a Killing Word in battle. Remember to save frequently until this is patched). After approximately two years real time play you will have gone through many quests and will eventually have taken an in-game lover, and can tame and ride the sandsnakes into battle. At this point you will be prompted to drink the Water of Life. Doing so will result in losing access to the game for some weeks, as your avatar is in a near death coma, but after this time has passed you’ll be able to see all past, present, and future across space and time.

After this you’ll be able to lead your warriors in battle against the forces of the emperor and the Baron Harkkonen. There’s a relatively simple boss fight; the boss is procedurally generated but has fewer variables than for planet generation so usually looks like Sting. Eventually you will seize the throne in a cutscene, and have avenged the death of your father Duke Leto. Congratulations on completing No Man’s Sky!