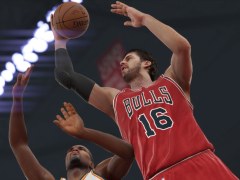 While NBA 2K16 is the most impressive NBA game 2K has ever produced, and is arguably the best sports game around, the series continues to offer a lacklustre tutorial section for newcomers, particularly for those new to the sport. Basketball itself is a very intricate, high-intensity sport that can overwhelm players not famility with the flow of the game.

VideoGamer has put together a few tips and tricks to help you get started on the offensive side of the ball in NBA 2K16. Follow these steps to start nailing jump shots and feel more comfortable in possession of the ball.

When shooting, look at your player’s feet

The shot meter determines the likelihood of whether or not the ball will end up in the hoop While you’ll naturally be drawn to keep your eyes on the ball or your player’s hands, you should actually look at the player’s feet when you go for the hoop so you can pay attention to the shot meter.

Even if you get the meter close to the middle, sometimes the ball still won’t go in, because there are many other factors that need to be taken into account: player stats, shooting zones (the areas on the court where the player shooting is most proficient at making baskets), defensive pressure and whether or not your player is on a hot or cold streak.

The regular 5-on-5 camera angle is a side-view, which while good at showing off the game and giving a TV-like presentation, isn’t great for working out where the space is on the floor. The best camera angle to opt for is those used in the MyCareer offerings, where the view is from either end of the court.

‘2K’ is a good camera angle to start with, but make sure you turn ‘Auto Flip’ on so that the camera remains behind the team in possession, and ‘Fix Height’ is on so it doesn’t move too much and become too disorientating.

PlayVision allows you to see how an offensive strategy is supposed to play out on the court: why your team-mates are moving to certain positions on the court and when to pass the ball. For beginners, this is essential for understanding when to make a pass and who to in order to create space for a shot.

Head into your options > coach settings, and turn ‘Offensive PlayVision’ to All Plays, ‘PlayVision Display’ to ‘Full’, all Playcalling to Auto.

Play to your team’s strengths

It’s important to have an understanding of the team you’re using and where its strengths lie. The Golden State Warriors have the best point guard and shooting guard combo in the league, so work best at nailing three-pointers and jump-shots. The Cavaliers have LeBron James, a one-man army capable of breaking down any defence, as well as a very elusive point guard in the form of Kyrie Irving. The Houston Rockets have Dwight Howard, an excellent rebounder who can take advantage of anything James Harden fails to throw down.

Take a look at the player stats of your chosen team and make the most of it.

You’ll find yourself frustrated and with a low scoring percentage if you keep forcing shots. You have a 24-second shot clock, don’t be afraid to use it all in order to create an open opportunity. Move the ball around the court, use the post if you have a big centre and play to your team’s strengths in order to have a successful game.

You can play as just one player to practice

Even in MyGM and Play Now, it’s possible to play as just one of the players on the court, rather than worrying about all five players. If you’re more comfortable playing as the point guard, or centre, from the main menu, head into options > controller settings, and change the Preferred Position to whichever spot you like. From now on you’ll be locked to whichever player is in this position.