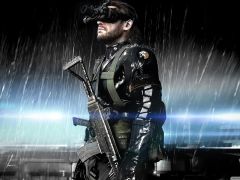 MGS5: Ground Zeroes Guide – How to get an S Rank and speed run it in 10 minutes

Metal Gear Solid V: Ground Zeroes’ main mission can comfortably be completed in less than two hours. VideoGamer will help you complete it in 10 minutes, without a single kill or being spotted.

To start, switch straight to your tranquilizer (down on the D-Pad) and stay to the right of the rocks. Wait until the searchlight moves across to the main road, then sprint down the path, staying right, and climb up the terrain to take the shortcut. Follow this higher route and drop down into the main base.

Keep sprinting across the road towards the campsite. You’ll hear guards talking on the radio about a strange noise heard from your sprinting, but don’t worry: you’ll be miles away from the area they go to investigate.

Take the second entrance – the one with the 15 mph speed limit sign. You’ll know which entrance to move into, as the first will have a small vehicle stationed at the far end. Jump over the barb wire fence, cutting between the first and second tent. You have to use the tents as cover as there are a couple of guards stationed on the right-hand side of the camp, as well as another search tower in the far corner.

You’ll come to a small open area with blue canisters, sprint through, and hop the fence at the end. Crouch-follow the direction the truck heads in – to the left will be a path leading to a prison camp.

There are two concrete barricades at right angles to each other. Hide behind the one parallel to you. A guard will be heading up the hill. There are two ways to take this guy out, both are tricky.

The first is to wait for him to get close, then take him out with your tranquilizer. The second is to let him move up the hill, then sneak around both barricades and take him out from behind. The first technique runs the risk of missing the shot thanks to him being quite far away, while he can easily spot you in the second.

You don’t have to worry about moving the body, as you’re not coming back this way.

Head left, off the beaten path until you come across some sandbags. Crouch behind these and watch the guard directly in front of you, stationed outside the prison entrance. Wait for him to face the sea, then sprint straight for him. You can stop and use your tranquilizer, or keep running and use CQC. Beware that if you try to use CQC, he will most likely notice you, and the game will enter Reflex, costing you valuable seconds.

There is a guard in the prison, but his walk pattern should have him on the other side of the prison by the time you get there, so he won’t spot you. Unlock the door and head immediately left to where Chico is in the farthest cell.

Skip the cut-scene, after which Chico will be lying in the cell unconscious. Call in the evac chopper while you’re in the cell; the game will suggest the nearest location (it will be on the coast, just ahead of your position). Pick him up and head back out the door. To your right will be another guard (though, oddly, he doesn’t notice the soldier you took out on the way into the prison). Neutralise him, drop down to the narrow path and remain crouched as you move.

There will be two guards stationed above you. One may notice your movements, and shine his torch, but as long as you’re crouched, you’re fine. Once you’re past the point where there is no cover, and the cliff face gets significantly taller, you’re out of sight, and can sprint to the extraction zone.

Drop Chico, he will give you a tape and wait for the chopper. Once Chico is extracted, sprint right and jump up the small rock formation and up again. You should be able to see the guard station below you to the left, where the two soldiers are. Sprint until you can see the truck at the top of the road, then crouch-walk until the side-path ends.

Lay on the floor, and wait until the driver of the truck heads back towards the driver’s door. Tranquilize the guard leaning against the barricade, then jump into the back. Don’t jump out until you can see a portacabin with a surveillance camera, this is where you make an exit and crawl under the cabin into a drainage channel.

At the other end of the channel, crouch along until you see an orange door, this’ll take you to the boiler room where Paz is located. Open the door, and sprint round to the left, CQC-ing the soldier stood between the two ventilation units before he has a chance to spot you. If you’re worried about losing time to Reflex, then use your gun.

Continue sprinting left, keeping an eye on the camera above the stairwell. Wait until it is facing away from the stairs, then sneak your way down. Hug the left-hand wall and wait for the two guards to leave the room at the bottom. As soon as they start to move, you can sneak behind them, sprinting to Paz once you’re safely in a different room.

Skip the cutscene, pick Paz up, and walk back towards the stairwell. Let the two guards finish their conversation, then follow the guard you can see, tranquilising him before he gets to the top of the stairs. Once back outside, sprint up to the balcony (with the blue iron railing). This gives you a good vantage point to take out the marine manning the orange door.

Open the door, and head right, hugging the wall all the way until you come across two gas tanks. There will be two guards by a door. Take out the guy closest to the door first, as the other won’t notice his pal falling asleep. Call in the chopper here, so you aren’t waiting once you arrive at the extraction zone.

Request it to land at the place you arrive into the camp. Head along the fence to the right and through the gate. Stay right, running around the side of a warehouse, to the right is a guard, shoot him. Head forward, to the lower right is the refugee camp, run along the right hand side of the fence above the camp.

Once you reach the end of the fence, turn back round and take out the soldier in the guard station. Pick the lock on the gate in front of you, and sprint up the canyon and get in the chopper.