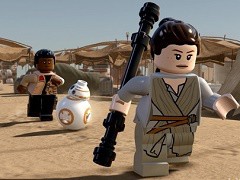 Maz’s castle has a load of minikits, most of them in her front garden, and this guide will help you find all of them, giving you the locations and characters you’ll need to get all ten. There are no minikits to find in the castle hall, so you can destroy everything to your heart’s content in there. Netting all of the minikits will unlock the Resistance X-Wing vehicle to use in the flight sections (there are a surprising number of versions of X-Wing to unlock).

All minikits in Castle Basement in Lego Star Wars: The Force Awakens

Minikit 1. Take out nine of nine little lizard monsters that burrow out of the ground to attack you in the garden. Three will pop up on the far left where you spawn in, three on the far right, and three once you get inside the outer walls of the castle.

Minikit 2. Before you go through the first doorway into Maz’s front garden, go to the right hand side and send Admiral Ackbar down into the pond there. You’ll get your next minikit canister.

Minikit 3. As you go into the courtyard look up on the right. There’s what looks like a sort of wall sconce near the front. Shoot it down and you will, for some reason, get a minikit canister.

Minikit 4. for the next one you need to have destroyed the tree, blocking the climbing wall on the left hand side. To do this you need to have smashed everything and then built climb up onto the first balcony and move to the back of it to collect the minikit. It’s floating just out of sight, the scamp.

Minikit 5. From the first balcony you need a character with a jetpack – Boba Fett or Athgar Heece – so you can only get this one, and the next one, in free play mode. You need to use said jetpack to fly to the next balcony along, which has the minikit canister on it.

Minikit 6. The last minikit in this area is on yet another balcony. The second balcony described above has a grate which you can send a small character through. This will take you directly over to the balcony opposite to collect the minikit canister. This arrangement does suggest that most of Maz’s balconies are purely decorative in nature.

All minikits in Castle Basement in Lego Star Wars: The Force Awakens

Minikit 7. This is the easiest one in the whole game, once you know it’s there. From the start of the basement area turn and go back up the stairs behind you. The minikit canister is floating around the bend, just out of sight, but you can make out the beams of light shining from it.

Minikit 8. There’s a point in the basement where you run into a big silver brick wall; it’s really obvious so if you miss it that’s kind of your own fault. Use a character with thermal detonators, like Chewie, and you can blast it open. The minikit canister is the other side, along with a load of studs.

Minikit 9. Throughout the basement you’ll find three cobwebs, near the ceiling, which you can shoot down to get your minikit. The final one is just after the silver wall described above, so if you get too far past that without hitting all three then you’ve missed one somewhere…

Minikit 10. In the giant puzzle room there’s a door on the right which can only be opened if you have a character with force powers. So get one of them (one of the jedi or sith; Luke’ll do you a treat here) and pull it open to collect the final minikit.