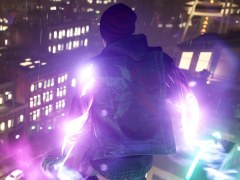 After arriving at the mission start waypoint, your attention is drawn to a group of protestors on the street below. You can choose to kill or ignore these protesters for good or evil karma. The next objective marker will appear on your mini-map. Head up to this billboard, and head over to the boxes on the roof behind it to ‘hide’ and trigger the next cutscene.

You finally have neon powers!

As this cutscene ends, you have access to the new ‘light speed’ power, which you’ll need in the ensuing chase sequence. This operates very differently to smoke dash, and you’ll need to use it well to keep up in the chase. Instead of a short dash, light speed is a much longer duration sprint which will allow you to rapidly scale walls.

It’s largely an improvement to your mobility, but during this chase be careful that you don’t spend too much time sprinting up a wall while Fetch gets away. Also note that if you use light speed in the air your jump will angle itself sharply downwards, unlike the air smoke dash. Simply jumping and hovering will be too slow to keep up in this chase, so you’ll need to time your dashes well to cover the open stretches.

Don’t worry about trying to do anything to Fetch during this chase, you just need to keep with her. At the end of the chase, a cutscene will ensue, and the battle with Fetch will begin.

In the first section of this fight, you need to drain all the neon signs in the building to weaken Fetch. This can be difficult, as Fetch moves very quickly, and her laser beam interrupts you, meaning you have to get away from her for a moment before you can try. Try to take as little damage as possible, her laser beam stuns you for a moment, so if you don’t immediately sprint away when hit, she’ll likely kill you.

The next section is far easier, but tedious. Fetch dashes around the area, occasionally taking shots at you but mostly trying to avoid damage. You only have access to the ‘neon beam’ power right now, so the only thing you can do is shoot at her whenever you can. Don’t try to get into melee with her; as soon as you get close enough she uses a shockwave ability around herself which knocks you back and damages you.

When her health gets low enough, an end-of-mission cutscene will trigger, in which you’ll get to choose between a good and bad karma choice for how to deal with Fetch.