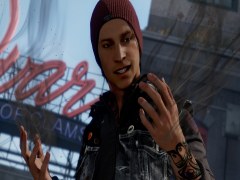 In the first few hours of Second Son, Delsin’s arsenal will quickly expand as he gains new smoke powers. Here are five tips to help make the most of Delsin’s powers as you explore Seattle.

Your smoke bar represents your ammo count. Your main sources of smoke are chimneys and wrecked cars. Note that whilst not all cars around the city are wrecked and smoking to begin with, you can destroy any car yourself if you need smoke.

As a general policy, it’s good to be mindful of your smoke meter and not to burn through your ammo without reason. Although there is technically an infinite supply of smoke on the map, trying to find a source mid-battle can be risky, and it can sometimes lead you away from the battle. Generally though, patience is the better option; it only takes a few seconds of avoiding damage for Delsin’s fast healing to kick in.

Also note that initially, smoke powers deplete your bar quicker than you might expect. If you find this to be a frequent problem, spend time finding shards and use them to level up your ‘drain smoke’ power, making abilities drain less smoke per use.

Speaking of melee combat, avoid resorting to fisticuffs against larger groups of enemies. Delsin is far less capable at close range, and whilst the standard soldiers you fight can be defeated with the basic three-hit combo, such a tactic almost always ends in taking damage. Delsin’s melee attacks are relatively slow. Enemies will often hit you before you hit them, interrupting your combo. Even the low-level soldiers have a melee attack that can knock you down. This move has a fairly obvious charge-up, so be wary to smoke dash away if you see one of them glowing orange. It’s better to stick to ranged combat most of the time, saving melee for isolated soldiers.

The easiest way to maintain distance is to keep your enemies below you, and that usually means sticking to the rooftops. Few of the soldiers are able to scale buildings, so fighting from rooftops keeps Delsin relatively safe. Moving from cover-to-cover is also easier, giving you more time to allow Delsin to recover from damage.

Having said this, pay attention to how the enemies become more mobile as you progress. In the early missions they are mostly content to stay on the ground and let you snipe them with your smoke shot, but later some of them will start using their concrete powers to jump up onto the rooftops. However, staying as high as possible is still the safest tactic.

In combat, try to use the vents to get to the rooftops as opposed to climbing, Delsin is an easy target while scaling walls. If you find yourself low on health, don’t start scaling walls out of panic. Instead, keep moving and use smoke dash to dodge as much fire as possible until you find a smoke vent. Smoke dashing into vents is a much quicker and safer way of getting Delsin onto rooftops. Simply smoke dash into one and you’ll emerge several stories above, which is often enough to break line of sight with your enemies and let you heal. The exits to smoke vents are often next to chimneys, giving you a chance to restore your smoke bar having evaded your pursuers. As an added bonus, if you are playing as good Delsin, you can unlock a power which restores a small amount of health whenever smoke dashing through a vent.

You can heal or execute wounded civilians for good or evil karma in the same way you can subdue or execute surrendering enemies.

However, if you’re playing as good Delsin, civilians can become a nuisance when you’re trying to fight the D.U.P because of their habit of getting too close to the action. In particular, watch out for nearby civilians when you’re trying to destroy D.U.P jeeps. The blast radius is large enough to kill nearby onlookers, leaving you with negative karma.

Of course, if you’re an evil Delsin, go nuts.

Apparently held together by string and fluff, one cinder blast to the connecting bridge will bring the whole structure down, killing any enemies on or around them. This is a far better approach than trying to snipe the enemies off one-by-one. When you unlock the cinder missile, you’ll be able to do this at even greater range.