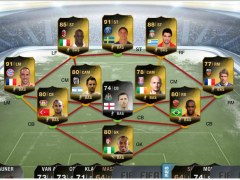 Ultimate Team has quickly become the most popular mode in the FIFA series. EA recently revealed that 64 per cent of all players have dabbled in FUT since its inception five years ago, with 725 million matches already being played in FIFA 14 alone.

If you’re yet to try out FIFA Ultimate Team, or even if you consider yourself a seasoned veteran, here are ten essential tips and pointers you need to know to become an Ultimate player.

All line-ups in Ultimate Team are built on chemistry. Chemistry dictates how well your players link up together when moving the ball around the pitch, how disciplined they are off the ball, and how well they maintain their shape defensively. If you find it nearly impossible to create chances or to stop opponents having clear-cut opportunities of their own, it’s probably down to your chemistry.

When you look at any line-up, you’ll notice lines connecting all of your players, this is a visual representation of your chemistry. FIFA uses a traffic light system to show whether your links are good or bad (red=poor, orange=ok, green=best). There are three different ways players can be connected to boost chemistry: play in the same league, be from the same nation or the same team. Players who share two of the three in common will have a green line between them.

A number on the right hand side of the screen will tell you the overall chemistry of all players on the pitch.

This is why it’s important to have a clear idea of what sort of team you want to build early on: do you want to build the best Premier League team? Get the best Bundesliga players? Don’t waste valuable coins getting players from all around the world that simply won’t play well together.

As well as player chemistry, we have Chemistry Styles, which are card modifiers that you can apply to each player to slightly tweak their stats. If you’re a big fan of Jack Wilshere, for instance, but wished he was a little faster, you can apply the Hunter chemistry style and he will suddenly get quicker (as well as get a shooting boost too).

A player’s individual chemistry rating will affect how much of an effect Chemistry Styles have. Head over to Sportra to see a full breakdown of every modifier in the game.

When a player performs very well for his club, he will receive an “In-Form” card for that week in the game. FIFA announce a Team of the Week every Wednesday at 3pm UK time, with the cards available from 6pm. You’ll be able to spot IF cards as they’ll be black. At first they are only available in packs, and are extremely rare. Players who manage to get one in a pack can sell them on the transfer market for a huge profit, with some fetching over one million coins.

These IF cards will have boosted stats over the player’s regular card. How well they played the previous week will determine how much better the card is.

It’s important that you learn to play the transfer market to get the biggest bang for your buck. Like any market, the value of players fluctuates over the course of a week. Here are some key tips in order to maximise your profit and minimise your spend and still build amazing teams:

– If a player has had an amazing weekend in real football, and you have his card, keep hold of it until the Team of the Week is announced on Wednesday afternoon. Once a player has an In Form card, all other variants of that card will disappear from packs, meaning you can up the asking price of the card on the transfer market,

– Whichever player you want, be sure to compare the price of that player card (hit X on Xbox, Square on PlayStation when viewing one of the cards) rather than buying the first item you see. Knowing what the going rate is for any player will help make sure you’re not paying over the odds, as some people will put a speculative asking price hoping unassuming players will pay it.

– The best time to buy cards is following a Happy Hour. EA Sports will announce Happy Hours via their social media channels, at which point players will be able to buy bundle packs from the store and receive more cards than usual. This means that the transfer market will be flooded with unwanted cards as players desperately search for that one rare gem, and also means they’ll often be a bit cheaper. Keep an eye on the players you want at these times and you’ll have a better chance of grabbing a bargain.

It’s important to have an idea of how formations behave on the pitch. Remember that in FIFA 14 Ultimate Team you can change formation at any time without taking a hit to your chemistry; as long as you have the players to fill the positions, you’re good to go.

The most popular and effective formations in FUT tend to be variations of the 4-3-3 and 4-2-3-1. The reason why these tend to be so effective is they offer good numbers in attack but keep numbers back to help slow down any opposing counter attacks.

Make sure that the personnel at your disposal fit the formation. An Italian side is unlikely to perform well in an attacking 4-3-3 that relies on pace and counter-attacking flair, as many of Italy’s best players are slow. Equally, German builds work best with width thanks to their pacey wingers and strong forwards.

Investing in a quality striker to build your Ultimate Team around will pay dividends in countless matches throughout your time online. A goalscorer will get you out of plenty of sticky situations, be it 0-1 down or a tight affair that’s level, a potent man up top can be a game changer. Alvaro Negredo is always a good option, and is very cheap on the transfer market.

FIFA is back with a raft of new additions.

FIFA is back with a raft of new additions.