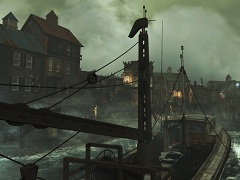 Fallout 4 Far Harbor: The Complete Guide to the New Factions

Fallout 4 Far Harbor introduces three new factions for you to juggle, although what happens with them won’t affect the rest of the game, so they’re more like mini factions. Each one has specific rewards and perks that come with helping them out, which is the sort of thing you should be used to by now. It’s worth knowing that, if you’ve sided with the Institute or with The Brotherhood of Steel, you can call down either of these groups to wipe out the synths on the island, but then you won’t get their rewards. Because they’ll all be gone.

The human settlers in Far Harbor will be the first people you meet on the island. They used to live over a much wider area of the island but the creeping irradiated fog has taken over much of it in recent years, and they’ve all been forced into Far Harbor. The de facto leader of the settlers here is Captain Avery, who cautions everyone to be reasonable when dealing with the other inhabitants of the island, but she’s challenged by Allen, who has a beard and a wool hat, and thinks everyone else on the island should be killed.

Rewards from the Far Harbor Faction in Fallout 4 Far Harbor

For helping enough of the residents of Far Harbor Captain Avery will give you the Rescue Diver Suit, which allows you to breath underwater and gives massive radiation resistance. If you help The Mariner upgrade the Harbor wall (or ‘hull’ as she calls it) all the way then you’ll receive the Defender’s Harpoon Gun – which is a harpoon gun – and if you help Cassie Dalton avenge the various members of her family she’ll give you Bloodletter, which is a weaponised boat hook.

The perk is called Harbor Survivalist. This gives you a big bonus to your resistance to all damage types, but you have to blow up the Children of Atom to do it, so it depends how much blood you’re happy having on your hands. Plus, long term, detonating an atom bomb underground on the island probably isn’t going to improve the whole ‘poisonous mist’ issue. But then again, you don’t have to stick around long enough for that to be your problem.

The settlement at Acadia, which looks like some kind of disused observatory, is a group of synths lead by DiMA, a prototype synth with a bit of a HAL 9000 vibe to him. DiMA genuinely wants peace on the island, it’s just that he may have been using questionable methods to achieve it. A lot of the synths DiMA has taken under his wing are either cagey or odd, and there’s some doubt over how many of them actually are synths anyway. DiMA’s method of proving that you are one is asking what your first memory is and then pointing out that you wouldn’t know if you were a synth even if you were a synth. So he clearly aced A-Level philosophy.

Rewards from the Acadia Faction in Fallout 4 Far Harbor

The denizens of Acadia will mostly reward you with caps, but there are a couple of physical rewards too. You have to help Faraday as part of the Acadian Ideals quest, and then Cog will ask you to help investigate Jules’ memories in The Price of Memory. If you talk to Cog and agree to keep what you found a secret you get a special sledgehammer. If you tell Jules the truth you get a piece of unique synth armour.

If you follow the main Acadia quest line to the end, doing everything DiMA says, then he’ll give you the Acadia’s Shield chestpiece, which gives you a +1 to intelligence, agility, and endurance.

Getting this perk is slightly harder work than the others. You have to get into the Nucleus peacefully and retrieve all of DiMA’s memories from the facility there, without starting a fight with the Children of Atom. Once you’ve done that, you can return to DiMA with all the evidence and then do what he says, which involves replacing the head of the Children of Atom after gaining his trust, and so on and so forth. Accomplish everything successfully and you’ll become the Protector of Acadia, which grants you a chance for a massive boost to energy and damage resistance if you’re severely injured. If you turn DiMA in to the residents of Far Harbor you won’t get this perk.

The Children of Atom Faction in Fallout 4 Far Harbor

The Children of Atom came to the island comparatively recently. They live in an underground dry dock with a nuclear sub, which is all well and good for them because they’re mostly naturally rad resistant, but not everyone is, thank you very much. The easiest way to get in with the Children of Atom is to go through their initiation and join them, because after that they’ll view you as some quasi-mystical figure and let you cut about pretty much wherever you like. Bring plenty of Rad-X and Rad-Away.

By helping out all the different children you can the High Confessor will eventually give you the Inquisitor’s Cowl, which will increase your intelligence proportionate to the amount of rads you have, and is also appropriate for evening and formal wear. There are some more specific rewards: helping Zealot Ware calm down Brother Devin will net you the recipe for Ware’s Brew (apparently if you cook soap long enough if cures radiation) and Grand Zealot Richter will give you an irradiated hammer, which isn’t that useful against all the mutated monsters on the island, but it’s the thought that counts.

If you finish the Children of Atom quest line, by either destroying Far Harbor or using DiMA’s ethically questionable method of bringing peace to the island, then the High Zealot will give you Atom’s Bulwark, a piece of armour that increases your damage and energy resistance the more rads you have.

The Children of Atom Faction Perk in Fallout 4 Far Harbor

This one you only get if you destroy Far Harbor, so you need to get the killswitch for the Far Harbor fog condensers from DiMA’s memories, and then use said killswitch. High Confessor Tektus will be overjoyed, and give you the Inquisitor of Atom perk, which increases your weapon damage as, you guessed it, your rads increase.