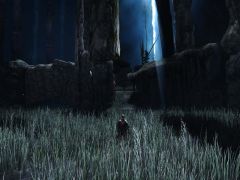 Things Betwixt acts as the tutorial area for Dark Souls 2. Your character will awake in a small pagoda. Run straight ahead and into the hut (towards the light). Be careful to find the bridge before the house, as you’ll fall to an early death if you miss it in the darkness.

There is a troll to the left of the hut along the narrow path, but it’s far too powerful for melee characters in the beginning. As a sorcerer, you can lead the troll back to the safe zone of the gap between two rocks, where it cannot give chase, and use Soul Arrow until it dies, giving you an early 1000 souls.

Once inside, you’ll be greeted by a group of witches, who will ask your name, allowing you to create a character class. After the cutscene, head upstairs to grab the Human Effigy which reverses hollowing and restores your maximum health bar.

As you’re progressing through the world, you’ll notice these small pillars. If you ignite a torch at the bonfire and then ignite these, it will really help to not only light your path, but act as a marker for areas you’ve already visited.

Head through the second door and rest at the bonfire. Through the cave is a winding path with a series of mist entrances to the right and left. Head through the first mist to your left. Kill the two soldiers that attack when you first walk in and the third guy in the next room. Proceed outside and along the ledge to the left, there’ll be a guard facing the opposite direction that you’ll be able to backstab.

Enter the hole in the tree on the left and kill the archers and guards. Before proceeding through the mist pick up the lifegem on the left. After entering the mist, head down the ladder. Head through the next mist on the right and kill the two guards. You can sprint and click the left stick to jump the gap and grab the Amber Herb. Back across the gap is a ladder to the left of the entrance you just walked through – climb up to get the drop on two guards below.

Grab the Cracked Red Eye Orb from the cave on the right then head through the next mist. Drop down the right-hand side of the ledge then proceed through the next mist entrance on to the right. Kick down the tree to the right then take out the archer. In the hole in the ground are two guards, one of which is an archer. Dropping down will cost some health, but you need to get down here, so jump down and immediately roll to avoid taking a hit. Kill the first guard then climb up the ladder to dispatch of the archer.

Enter the mist, turn left and knock down the tree to open up a shortcut back to the main area. Don’t bother fighting the two giant trolls on the beachfront as they are far too powerful right now.

Head back to the main path and up towards the exit. Follow this cavern around and you’ll find yourself in Majula.