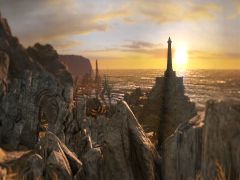 Majula is the main hub area of Dark Souls 2. The area is mostly safe for players to explore, though there are some bug-like creatures that can be found in some of the nooks and crannies that can deal high damage in the early parts of the game. Just run away from these things and they’ll soon give up the chase.

The Majula bonfire can also be used to upgrade your Estus flask using Sublime Bone Dust, which can be found throughout the world of Dark Souls 2.

There are a few notable things in Majula you should look out for:

The Emerald Herald is found near the Majula bonfire. When you first speak to her, she will give you an Estus Flask, which you can ‘level up’ by finding Estus Flask Shards on your travels. Giving her Flask Shards will give you more uses of the flask between rests at a bonfire (or a death).

The Emerald Herald is also the only NPC in the game that allows you to level up by spending souls. You have to fast travel to the Majula bonfire every time you want to spend souls and speak to her.

The blacksmith Lenigrast is sat outside his workshop to the left of the large set of stairs at the very end of Majula. The door to his shop is locked when you first arrived, and you’ll need to buy the key from the merchant sat just next to the Cardinal Tower bonfire.

There is a small well next to the giant hole to the left of where you first enter Majula from Things Betwixt. A rock is sitting on the edge of the well attached to some rope, hit this rock and knock it into the well to bring up a body holding a flask shard. Give the shard to the Emerald Herald to upgrade your Estus Flask.

The Company of Champions (covenant)

The Company of Champions is found on a small hill to the far left of Majula, beside the entrance leading to Heide’s Tower of Flame. This covenant makes the entire game harder by increasing the amount of damage dealt by enemies, as well as upping their amount of health.

There is a huge stone tablet along the cliff edge, interact with this to join the covenant, you’ll be given the Victor’s Stone.

Way of the Blue (covenant)

You can join the Way of the Blue by speaking to Saulden at the top of the stairs. He is sat by the pillar, with his head in his hands. This covenant allows players to assist fellow members when invaded.

You will need a key to open the two-story mansion in Majula. The key is found in the Forest of the Fallen Giants by speaking to the man obsessed with maps located in the tunnel with the falling boulder [link to forest guide]. There’s a Pharros’ Lockstone behind the bookshelf and a skeleton guard downstairs that can be very tough if underprepared. It’s worth fighting this guy early on as the bonfire is nearby and the guard protects an Estus Flask shard as well as a Soul Vessel.

Shalquoir is the feline you speak to if you wish to abandon covenants. She is found in the small house with the wooden door near the well. She also sells various rings that offer different status effects.

This merchant mainly supplies defensive items like shields and armour. He can be found sitting in the house without a door.