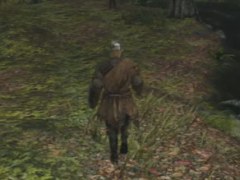 Getting through the Forest

To get to the Forest from Majula, follow the cliff edge from the bonfire back towards the entrance to Things Betwixt until you come across an entrance. To the immediate right is a chest with a Rusted Coin. Carry on to the left and you’ll find a lever to open the door.

Head over the drawbridge and down the steps to get to the Forest. Turn right and walk upstream to grab a homeward bone and soul. Head back along the right hand side to grab a life gem, then sprint, keeping right to find the next bonfire.

From here, you can start attacking the hollow soldiers. Start with the guys on the left as there is an archer to the far right than can hit you if you’re in his line of sight. Once the cluster near the bonfire are down, sprint over the log bridge, ignoring the archer and attack the sword and shield soldier on the right side. Then kill the archer and drop down to the stream to get a soul of the lost undead.

Back where the archer was is a ladder, head up it and you’ll be ambushed by three hollow soldiers. Head straight back down the ladder and pick them off as they each climb down to fight. Head back up the ladder and grab all the items littered on the floor, mindful of the archer high above. Run outside and kill the two guards on the stairs. You’ll reach the top of the moss-filled castle where the archer is, kill him then sprint-jump to pick up a shortsword and a soul. There’s also a soul on the higher ledge you can get to along the wooden planks from here.

A white knight is sitting under a tree in the middle of the open area. If you’re early in your playthrough, avoid him. He’s very tough for new characters, but beating him rewards you with the Heide Knight Sword. Mages will have an easier time dealing with the knight than melee characters, but the sword doesn’t benefit you, only the souls.

Head towards the mist, but watch out for the hollow soldier that rises from his supposed dead state right next to it. Head straight forward from the mist and over the rubble into the room with two guards. Out the door and to the left is another guard you can backstab. In the opposite direction is a new, slightly tougher enemy.

Head up the stairs, go past the door and kill the knight, go back through the door and ignite the bonfire. You can head back outside and grab the Fire Longsword by following our guide.

From the cardinal tower bonfire, you can speak to the merchant to buy the key to Lenigrast the Blacksmith’s workshop. Head down the ladder and take out the knight across the bridge. Let him come to you though, as the knight sat on the floor will pop up as you walk past. Head over the bridge, kill the other knight and grab the soul.

Back across the bridge will be a pathway leading up a tree. Take out the other knight playing possum in the first room then head outside. Once you’re halfway up the fallen tree, and can see the open door with the wooden ledge outside, drop down. Kill the knight in this room. Turn back outside, down the wooden ledge and drop down to the grass. You’ll take a small amount of damage from the fall.

Move round and kill the archer stood along the edge of the water. Climb up the ladder, there is an archer stood along the edge of the castle to the right, keep moving to avoid his arrows. Head over the red roof, jumping onto the wooden platform. Head down and turn left, don’t be tempted by the item at the end of the cave, a boulder will be passing from right to left as you approach and is an instant kill. Move forward then backwards roll first to avoid this. Head left and speak to the cartographer at the top to gain the key to the locked house in Majula.

Head back out and climb the ladder on the left, you can finally reach the last archer. Kill him then follow the path at the end to get back to the fallen tree. Take this path all the way up and kill the two knights. Climb the ladder to the right and kill the knight throwing fire bombs, make sure you drop down as soon as this knight is dead as a crow will drop The Pursuer onto this platform, the boss of this area. The Pursuer will disappear if you drop down from the arena and not reappear, so just continue with the rest of the Tower.

Head down the steps and kill the two knights. To the right of the ladder is a hole in the wall with several giant crossbows. Walk into the room then swiftly back out to avoid the arrows, hopefully killing one of the knights in the room. Three or four knights will now come out and attack you. They don’t pose much of a threat if you have the Fire Longsword or Heide Knight Sword, or for mages who can head back up the ladder and use magic to kill them. Anyone less powerful should avoid this room.

Grab all the items inside (Great Soul Arrow, soul and Blue Wooden Shield) and head down the ladder. Open the chest and quickly roll behind it, it’s booby trapped. Whether it’s rigged with arrows or poison, rolling behind the chest is your best chance to avoid being hit.

Head back outside. Across from you is a series of black barrels and an armadillo-like creature holding a mace. Sprint forward to get the black guard’s attention and move away from the barrels, soldiers on the ledge up top will throw firebombs down, exploding all the barrels and causing huge damage.

To beat the armadillo, keep circling with your shield up and wait for vertical attacks, taking two swipes every time. don’t get too close to its back, as it will slam backwards and crush you.

Head through the doorway the soldier was protecting and turn left, kill the two knights. To the right is a large sword broken off from a statue with a halberd knight at the very end. There’s a knight playing dead on the floor before the sword, kill him first. There’s another guard stood above you waiting in ambush as you move up the sword. Sprint up the sword then back down and kill these two, then run up to grab the item.

Head back down and through the door, ride the elevator and carry on along the hallway, killing the guard before the mist. This is where you’ll fight The Last Giant. follow this link to learn how to kill The Last Giant without taking damage.

For now, you’re done with The Forest of Fallen Giants, it’s too soon to face The Pursuer, a very tough boss that requires a fast character build that has a good amount of health and damage resistance. For now, head for Heide’s Tower of Flame.