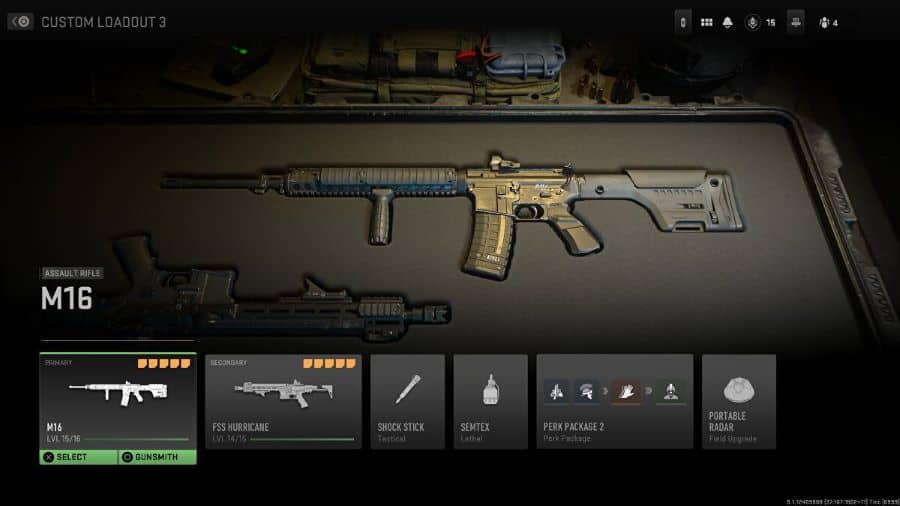 The M16 is a classic Assault Rifle, making its return to the Call of Duty Modern Warfare franchise with Modern Warfare 2. Boating a fast and powerful three-round burst, the M16 is among Modern Warfare 2’s most potent assault rifles, filling an important niche of medium range to long-range combat.

We’ll get you up to speed with the best loadout choices to make for the M16 in Modern Warfare 2.

The M16 seriously suffers in close-up engagements, especially when compared to other assault rifles like the Kastov-74u and Chimera. The M16’s lack of consistent sustained fire means that it can easily be outgunned by weapons without a pause in their volleys, not to mention specialized close-range tools like the Expedite 12.

If you’re going to wield the M16, you’ll need to know precisely which ranges it functions best at. Time your shots carefully to compensate for the break between bursts, hold your ground, and don’t be afraid to re-position in order to maintain your range advantage.

The lack of full-auto means that you will have greater control over the remaining ammo in your mag, be sure never to let it fully deplete before engaging an opponent.

Modern Warfare 2 – Best Perks to Equip With the M16

Reducing explosive damage is a huge bonus for a mid to long range gun. Often opponents without long range capabilities will hurl explosives your way instead of trading gunfire, and the E.O.D perk will increase your chances of survival in those instances.

Improving your ADS is a significant bonus when using the M16, making you a more consistently accurate threat at long ranges. The increase to your Hold Breath capabilities afforded by this feat increase the chances of your first shots being as accurate as possible, dropping the enemy before they even know you’ve seen them.

Modern Warfare 2 – Best Tactical Equipment to Use With the M16

The Tear Gas equipment will significantly increase your offensive capabilities. If your opponents happen to be bunched together, tear gas will leave them slowed and vulnerable, with coughing that easily gives away their position to any of your nearby teammates. The m16 will allow you to easily pick them off in this condition.

Spot and mark your enemies with this excellent reconnaissance tool. Since you’ll be spending so much time scouting anyway, you might as well make your efforts count for the whole squad.

The M16’s long range capabilities may encourage you to go for a scope with higher magnification, but the Cronen Mini Red Dot is among Modern Warfare 2’s most powerful tools and simply shouldn’t be ignored.

Long-range capabilities are all well and good in an AR, but if you want to make doubly sure your shots deal the damage you want them to, the 14″ Carbine Shroud will upgrade bullet velocity and help secure your kills.

Your ADS speed is dramatically improved by equipping this rear grip in the gunsmith, allowing accurate shots with minimal delay.

Modern Warfare 2 – Best Weapons to Pair With the M16

While it shares the M16’s weapon class, the Kastov is significantly more tuned towards short-range. This weapon’s uninterrupted rapid fire will pair nicely will the M16’s three-round burst, and will allow you to hold off any opponents that get in close.

Another close-range alternative, but one that doesn’t require the Overkill perk to equip. The X13 is a secondary weapon that will help to increase your survivability against foes encroaching on your position, and has more of a chance of earning you kills than the basic X12 handgun.

What Is the Best M16 Loadout in Modern Warfare 2?

How to unlock the M16 in Modern Warfare 2

Begin with the M4 and use it in matches until it levels it up to the point that you unlock the 556 Icarus. With the Icarus LMG unlocked, repeat the process and level it up until you unlock the M16.