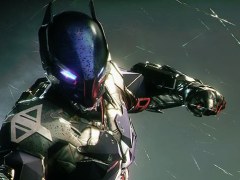 Batman: Arkham Knight guide – how to master the combat system

While the Arkham games provide an excellent combat system, there are many more enemies in Arkham Knight which will require a Batarang or some other gadgetry intervention other than a standard counter (by pressing Y/Triangle). The best way to avoid these foes is to make sure Bats is as active as possible at all times in a fight, zipping around the floor and becoming increasingly hard to hit. The more elusive you are, the less you have to worry about the different countering techniques, and can focus on your onslaught. This is a helpful way to get used to combat in the early hours of the game.

Use takedowns as soon as they’re available

Batman earns a takedown after landing eight successive hits (five with an upgrade), use the takedown as soon as you reach this milestone. Any hits landed after your combo goes gold are wasted punches which could be used to immediately take down one of the scores of bad guys you’re dealing with.

The later you leave it to produce a takedown, it delays your opportunity of a second and third takedown to much later in the combo chain.

Keep as many villains in view as possible

With the new charged takedowns bad guys can pull off, it’s important to keep as many of them in view at all times as possible. The last thing you want during a 20+ combo is to suddenly be taken to the ground by some low-level baddie who comes from out of nowhere. Try your best to keep rotating the camera to keep your opponents in view, so you know which ones are on the brink of an attack.

Observe the battleground before jumping in

Don’t ever forget: you’re Batman. Batman doesn’t leap headfirst into battles without first scoping his surroundings. Take the time to have a look at all the enemies there are in a particular area, if they’re carrying weapons, if there are any environmental takedowns you’ll be able to use during the fight, anything for you to hack. Making sure you know what you’re getting into better than you enemies do will mean there’ll be no surprises when it all kicks off.

Batman has a utility belt full of gadgets which are incredibly useful in a fight. As you progress through the game you’ll unlock lots of new toys, the vast majority of which can be used in fights. Make sure you experiment with each of them and play to each of their strengths in the fight. It can be a little tricky at first remembering all the button inputs, but without spoiling any late-game content, it’ll be essential for you to get comfortable using all of the gadgets.

Use your stun attack when in space

Using your stun attack is great when trying to quickly tot up your combo to a takedown. If there’s one guy isolated from the pack, quickly use your cape to stun him (circle/B) and unload a string of attacks. Be mindful of any other guys looking to hit Batman from behind and be ready to counter, but try your best to get up to a combo takedown. Don’t waste it on the stunned foe, though, as you can finish them off with the flurry alone.

Always open with a smoke pellet

Smoke pellets disorientate anyone inside its fumes. This is great for quickly whittling down the amount of guys you have to fight, as you’re free to use ground takedowns as long as the smoke is still in plume. Take the time to upgrade the smoke pellet early and you’ll reap the benefits in fights.

Use the Batclaw to disarm enemies

If you land in an area where there’s a couple of armed guards, use the quickclaw (left stick toward opponent and L2+triangle/LT+Y) to grab hold of them and drag them towards you, they’ll stagger and pressing attack will see Batman clothesline them. They’ll drop their guns, but make sure you prevent anyone else from trying to pick them up during the battle by continuing to landing a punch when they try and grab them.