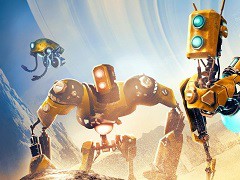 In Futurama there are a number of robots with distinct personalities based around the roles they perform. There is, for example, Tinny Tim, a robot built to be a child, and who has been programmed to beg and write in ‘cute backwards letters’ on signs. There’s also Fat-bot, written as part of a wider joke parodying Animal House, but whose only discernible function in the Futurama universe is being overweight. In a DVD commentary Matt Groening notes that Hedonismbot, a golden robot that resembles a perambulatory roman couch with a torso lying on it, is called Hedonismbot rather than Hedonistbot, so rather than just being a hedonist it is the actual personification of hedonism. In the context of the tv show this is funny, mostly because it is absurd that anyone would deliberately make these robots. Which brings us to ReCore, where it becomes less comedically absurd and more dark and cruel.

The robots you pal around with in ReCore are probably the best part about it. They’re metal frames that resemble animal archetypes (a dog, a spider, and an ape) but you can collect blueprints to change and upgrade the frames. The important part is the core, which is a coloured glowing sphere of personality that animates the robot frame. Their behaviours are distinct enough that they have different names: the ‘K-9’ frame that Joule, the player character, starts with is driven by a sphere called Mack, and later you meet Seth and Duncan. It’s fun because you can make Mack look more or less like an actual dog. Seth can go from a cute yellow spider to an armoured hell beast. It’s all very whimsical. But then it starts to get weird(er).

The framing plot for ReCore is that earth was rendered uninhabitable by a disease, so we all flew on colony ships to Eden Prime, the desert planet Joule eventually wakes up on, and while humanity was in suspended animation in orbit the robots were supposed to be busy terraforming the new world for us. Adams, the scientist who designed the cores, deliberately made them to have distinct personality traits, and colour coded them based on this. You can hear this in an audio log of his – he reasoned it would make the teams of robots able to adapt to different situations, as well as less likely to rise up and overthrow humans, somehow. The base traits he chose were a kind of excitable/playfulness, fear, and anger.

This raises some questions, most prominently: how did he think this was a good idea? How many people further up the line also approved it? Why did this ever get out of the planning stages? Why would you create subservient AI programmes and then teach them to be angry and afraid? What the lightly-fried-fuck is wrong with you people?

Imagine building an arachnid robot frame that can climb upside down at great heights, and carry many times its own weight, and then giving it a personality that is afraid of doing that. In one scene Mack sustains damage and limps as if he’s in pain. What kind of monster programmes a robot to do that, especially if they’re just there for a construction project? If you tabled any of this to NASA or MIT you’d be immediately dismissed, with a recommendation that someone keep an eye on you in case you progress to torturing live squirrels on your down time. You’d be on some sort of list somewhere.

Of course some of the robots turned feral. You made them self-conscious and basically unable to die from natural causes, and left them alone on a desolate desert planet for two centuries. Anyone would go a bit peculiar under those circumstances. The fact that some of them eventually formed a kind of tribal society, with the intent of destroying the humans who designed them with such specifically cruel parameters and claiming the planet for themselves once and for all, is actually quite sympathetic. I don’t think it’s really an intended theme of the game, but the more of ReCore I play, the more I’m getting ‘We were the monsters all along!’ vibes. What right do I have to barrel in and destroy an established, if artificial, robotic ecosystem and society, when we were the ones who gave them the capacity to want to create one? Is it because we called dibs on the planet? Because we didn’t mean for them to develop actual feelings? To what extent can their emotions said to be real if a scientist developed them? I imagine the answer is somewhere in the region of ‘they probably feel real to the AI core having them’. The humans in ReCore deserve death for a) their hubris and also b) their stupidity and failure to watch any 80s sci fi films whatsoever.

In the event of ReCore ever getting a sequel, I’d like to see a game where you play as a core. A plucky one from an out of the way building, who didn’t really have anything to do with the conflict between Joule and antagonist AI Victor. He just has to protect his friends from being destroyed by the people that made them, simply because they’re not functioning as expected. They’re not bad, they’re just drawn that way.

As one of the last remaining humans, forge friendships with courageous robot…

As one of the last remaining humans, forge friendships with courageous robot…