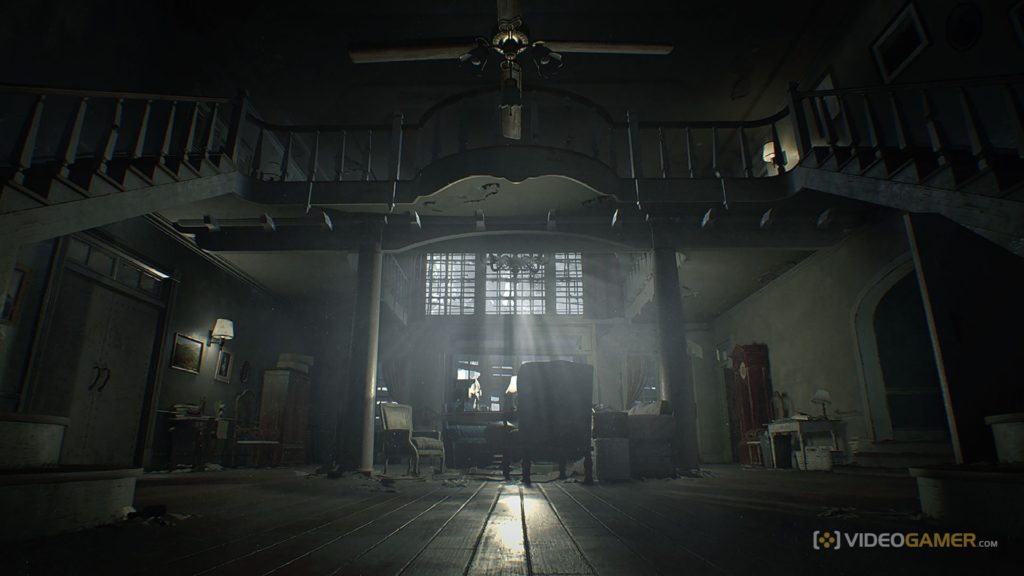 A lot of the promotion for Resident Evil 7 was centered around the house it’s predominantly set in: the miniature models of it in the Collector’s editions; candles that smell of it; live escape-the-room experiences inspired by it. The reason for this is, of course, that the house becomes a character as much as the Baker family who live in it. The crumbling Louisiana mansion, with appendages in the form of other connected buildings. Despite my earlier prediction that the Bakers were going to be the best bit of Resi 7, the most interesting character in the game is their home.

It’s certainly more so than Ethan Winters, the guy you play as. He’s there to rescue his missing wife, and could have avoided involvement in this entire episode if he’d just called the goddamn police, Ethan. It would have been nice if he’d had a more compelling hook, because as it is my sympathy for him is minimal. He got himself into this mess, and now I have to get him out. I’d happily leave him to die if I weren’t piggybacking inside his dumb-ass head. What, you’re smart enough to combine chemicals to make your own antiseptic, but you don’t tell anyone where you’re going before you leave for a remote town in Louisiana? Fuck you, Ethan.

The house is a different beast altogether. Because you are alone, only communicating remotely with a woman named Zoe over the phone, it’s easy to interpret the house itself as sentient. Just as the Bakers are sick, their home is sick too. It feels that they, with their skin as sallow as the plastering, could be an immune system defence; the house got ill first and is lashing out through its inhabitants. They appear from alcoves that they couldn’t possibly have reached ahead of you, and if you thought about it seriously you’d know it to be impossible, but your brain rarely flags it up as incongruous. Marguerite Baker could surely have faded into the peeling yellow wallpaper and transported herself across the house on a whim, for the express purpose of yelling really up close to your face.

But perhaps they’re actually symptoms of the virus attacking the house. The Bakers’ activities are destroying it, neglect and rot gradually breaking it down. Just as the infected family sometimes behave in an oddly caring fashion before returning to extreme violence, the house is in turns hostile and friendly, attacking you and shielding you in equal measures. It was infected unwillingly and now that infection bubbles up from its basement. Its outlying buildings are being gradually destroyed, its partition walls are full of parasites, and its foundations are flooded and full of bloated, rotting corpses. It is a most unhappy house.

When you’re in heavily contaminated areas, and humanoid monsters peel themselves from the dark, fungal growth caking the walls, it’s as if the house is blindly lashing out at you. But you also find safe rooms with save points and bright lighting and mostly clean floors, rooms where the bad people don’t come. You’ll find them when you most need them, marked by an honest yellow light seeping through wooden boards or under the crack of a door. At these times it’s like the house knows you’re purging the infection, as if you were a righteous white blood cell armed with wits and a shotgun, and it’s trying to keep you safe. It’s not the house’s fault that an alarming number of doors are locked with incredibly specific keys, or multiple pieces of a statue, or, somehow, a magic shadow (???).

Capcom has built a convincing environment that feels lived in, the difference between trying on a brand new coat or wearing an old one that belongs to someone else and has furry sweets of suspicious origin in the pockets. The atmosphere inside the Baker House is incredible. As you explore you get to know the layout and the secret passages, and see glimpses of the former glory of this mansion-cum-farmhouse (which can seem, at times, impossibly grand, as you suddenly discover that there is, for example, a two story greenhouse you didn’t know about until now).

The main house has an imperial staircase, a balcony walkway, children’s rooms, guest rooms, a rec room, all once comfortably fitted and full of sports trophies and personal photos and now containing broken furniture, tins of maggots, and blurry pictures you don’t want to look too closely at. It’s so carefully put together that when you eventually move to different — and less quietly personal — areas the game suffers for it.

Alone, in the dark, and damp, it seems like the house has been fighting the good fight, gradually sacrificing different parts of itself and keeping others as whole as possible. Even though it cannot actually be the case, you’re able to believe that the Baker House was just as unwilling a participant as you were. It’s actually a theme of the whole game: almost everyone is acting involuntarily (the ‘almost’ representing a separate, scalding hot take by itself), even the ones whose motivations have been reduced to ‘turn some people into monsters and some people into casserole’. The only person who wilfully got himself involved is Ethan.