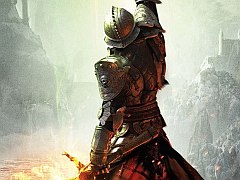 Dragon Age: Inquisition doesn’t start especially well. After racing through the prologue and saving the world (for the first time), you’re let loose in a gigantic open area called ‘The Hinterlands’. It’s spectacular, and you’ll be itching to EXPLORE everything that you come across, as you clamber across the many impressive landscapes, all the while slaughtering bandits and spamming that new jump button to your heart’s content. It’s great! This is what fantasy RPGs are all about! We’re all having so much fun! Except, I sort of wasn’t.

Drinquisition is full to brim with side quests and collectibles and just an incredible amount of stuff to do, but so much of it ends up feeling unimportant. These quests (I’m not talking about the main storyline stuff here) are doled out like you’re playing a single-player MMO and they contain almost none of the fantastic dialogue and decision making that’s experienced throughout the rest of the game. To be fair, I think I may have approached this game with the wrong mindset initially and tried to do everything, as I had in past Dragon Age games, and so I spent an awfully long time running around that first area and not really having that much fun.

Once you realise that these side quests are just a bit rubbish, you can concentrate on the stuff that really matters. The storyline quests and the party members themselves – that’s where your action’s at. After that, it’s a much more enjoyable thing and there’s a very significant moment in the game where I realised that BioWare hadn’t dropped the Fantasy RPG ball. The Inquisition transforms into a political power in its own right and places you at its head, which brings with it a bagload of morally grey, Dragon-Agey decisions. Your character isn’t just a soldier anymore, but an incredibly influential figure that can and must change the world of Thedas irreversibly and not necessarily for the better. Yeah, that’s more like it.

On top of that, Dragon Age: Inquisition is a game that revels in fan service. I wanted to hear about Hawke and the Warden Commander and I wanted to catch up with Morrigan and Alistair and chat about all the cool stuff we’d done in the first game. I needed Dragon Age to tell me that it cares and that it remembered who I was. And it sort of managed that, y’know? Game of the year.

I absolutely adore XCOM, it’s probably my favourite video game. But of course, I’m talking about the remake because I’m one of those awful people. This year, Xenonauts gave me a chance to play the original X-COM: UFO Defense, but without actually playing a game that was released in the early ’90s. That’s the dream scenario, right there.

It strips back some of the fiddly UI issues and makes everything look quite a bit nicer, but it endeavours to keep all of that wonderful detail that separates the original XCOM from the the 2012 Firaxis release. It’s a surprisingly different experience, putting an emphasis on clever inventory juggling, a larger roster of troops and an intimidating freedom when it comes to the base building stuff. This is a game with fewer super soldiers and significantly more management in between missions. That may sound dull to you, but that’s because you’re wrong.

The prettiest game of the year, and it features a cast of actual giant vikings. I’ve got an awful lot of time for that AND IT’S A TURN-BASED TACTICAL GAME. That being said, the combat is arguably the weakest part of The Banner Saga, with a system that almost rewards players for losing units throughout the battle. It’s not bad once you wrap your head around it, but it feels a little unnatural to play at first.

Thankfully, the story itself is a real treat, and full of fantastic moments in which the player can make awful decisions that kill off major characters. Listen. Let’s not mess around. Just have a look at a few screenshots and you’ll know what you need to do. It’s even been ported to iOS and Android. Just go and sodding play it. Did I mention the giant vikings?