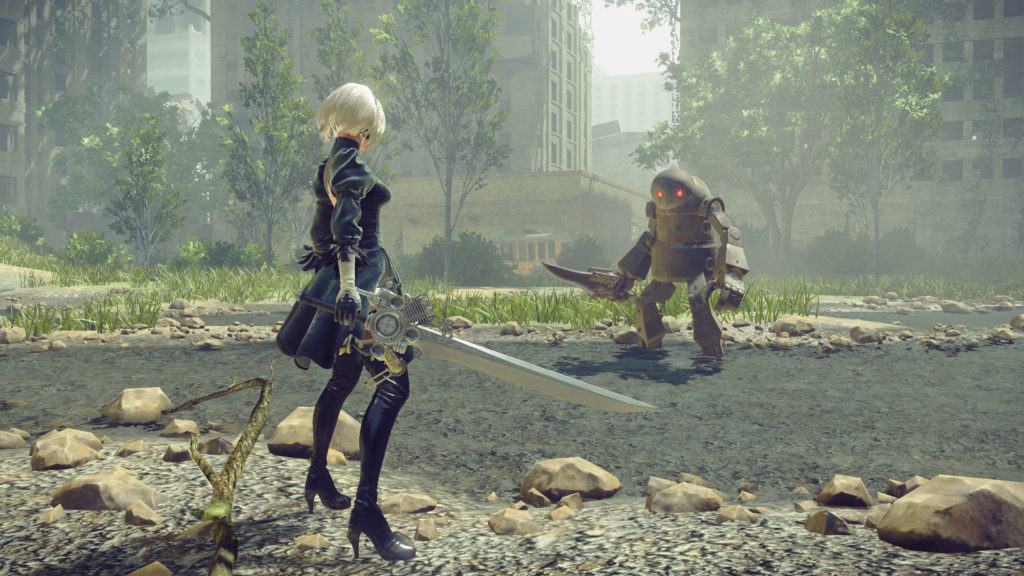 The wonderful weirdness of NieR: Automata

I’ve encountered some articulate game characters in my time, but it’s hard to think of too many robots called Jean-Paul that will quote Sartre-like philosophy at me. Nier: Automata, though, goes further than this, adding in robot-fans of robo-Jean-Paul who are all small “girls” who wanted me, as the protagonist 2B, to give him gifts. He doesn’t care, of course: he’s aloof and full of a floaty vocabulary, filling the screen with his textual existentialism chatter.

Oh and he’s massive, wears a top hat, and lives in a village of intelligent robots. The village is also in a forest right near an amusement park.

The thing is, it’s the madness of writer Yoko Taro (writer/director on the original game which, for the record, you won’t need to have played to enjoy Automata) that meshes so well with the Platinum Games we know and love that makes it all feel so special.

In any other game an escort mission would be horrible. Nobody likes them, they’re never good, and are rarely even acceptable. Yet somehow, despite managing to accidentally do two of the bloody things (one after the other), Platinum has done the unthinkable and made them actually enjoyable.

The reason they’re good is because the writing is witty and sharp. Escorting someone’s sister home because they’re lost in the desert should be boring, especially when you’ve just escorted someone’s baby-brother home, but it is because the sister starts talking to you, and it all culminates in an awkward conversation about where babies come from.

Part of the insanity comes from the combat, naturally. Finding new, huge weapons which magically sit on 2B’s back before swinging halfway across the battlefield and utterly smashing the shit out of some robot asshole who crossed your path is satisfying, but it’s that writing that elevates Automata to the level of ‘special’ — it’s whip-smart and forever winking at you, allowing you to be in on the joke.

The ever growing relationship between 2B and young-boy-android-companion 9S is funny, too. 9S is the more “human” of the two, trying to understand emotions and why people do what they do, even though he’s actually not supposed to do this. 2B is cold and calculated; it’s about doing the job and getting on with it.

9S wants to be called ‘Nines’, of course. All his buddies call him that, because they’re all cool hip dudes. 2B doesn’t understand why he wants her to do the same, and as their characters grow, and you understand more of the world, she clearly becomes attached to him. Hey, look, in a way we’re all robots, right, going about our lives as emotional husks, just trying to live and learn and, wait, actually, I think maybe Jean-Paul just got under my skin —  it’s fine, we’ll all be fine.

This weirdness permeates into every fibre of Automata, but it also produces some genuinely terrific ideas. While the combat is, on the surface, fairly simple (simple if you want it, deep if you prefer), it’s how you customise 2B that makes it feel different. With a set number of points to use (you can buy more in-game), you might find yourself choosing between having a skill that gets you health back when you kill an enemy, or lightning damage being added to your attacks.

Elsewhere, Nier addresses that it’s a game all the time. Some of the loadout skills include options to auto attack ‘If you put it on easy mode’ and there are even people in a settlement that answer questions like ‘How do I save?’ or ‘This game is too hard!’

Honestly, I’m barely scratching the surface because I don’t want to spoil the game, but know that it features an androgynous male character who then gives birth to another androgynous male, both of whom become key story components.

It’s mental, honestly. You can ride a moose too, if you want to. There’s no good reason to do so, but why wouldn’t you? In a world that has robots in lipstick, bosses that scream about how they want to be beautiful, and that ridiculous skirt that 2B wears, you may as well ride the moose. I mean, in a way aren’t we all riding the moose?

This article was kindly done for us by Adam Cook. You can find him doing other rad stuff on Twitter.