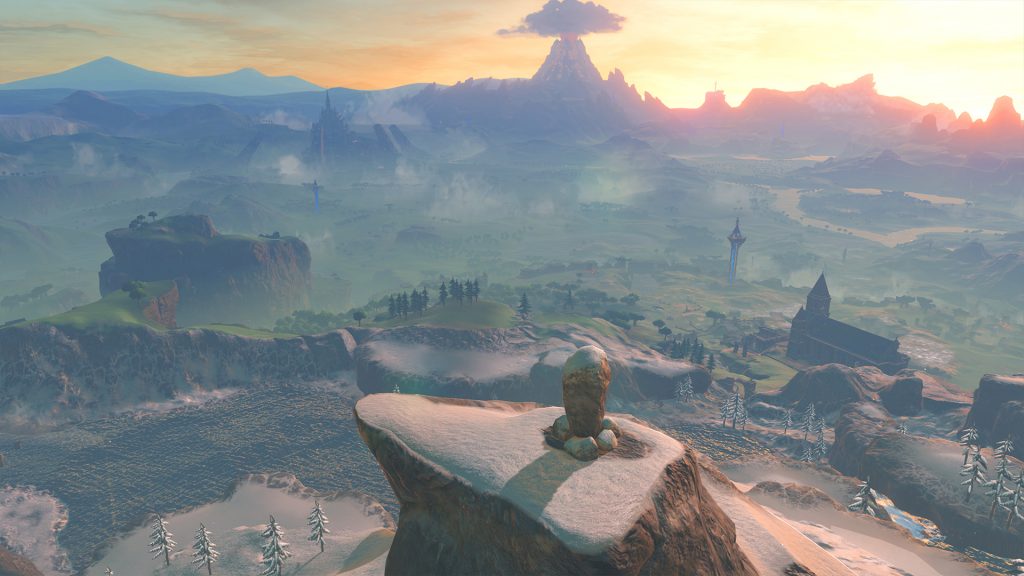 The Legend of Zelda: Breath of the Wild speaks, and you should listen

Link, elfin hero of the Legend of Zelda series, is very much a Peter Pan figure. Shigeru Miyamoto has said that Link was inspired by Peter Pan, at least visually. Now, after decades saving Hyrule and Princess Zelda from the evil pig-man-beast Ganon, many different times and many different ways, Link is the boy who never grew up. Except he has a bit. He certainly got taller.

This is good, because Breath of the Wild is a more grown up adventure — or at least, it’s the kind of adventure a child might imagine they’ll have when they’re grown up, the kind of adventure where you can tame wild horses, climb trees to eat apples, and fly from the tops of mountains, and sometimes it might be a bit scary but, if you need to, you can run away to somewhere you can eat a cake and feel better — and there’s a lot to be done. So Link (and us with him) hears the call of the wild now.

The Breath of the Wild is surprisingly musical, by which I mean it doesn’t have very much music but it has a lot of very specific, very well made sounds. The times it does have music are usually times you run into civilisation, like the stables dotted around — and sometimes at the stables there’s a Rito bard, playing Epona’s Theme on the accordion (against all physical probability that he is able to play an accordion). Sometimes, when you crest a hill or enter a wide prairie, a few piano notes sound to remind you that you’re in the wild now, but they’re not happy notes. They’re slightly menacing, because the wild, the great-out-there, is dangerous.

Most of the time, though, you’re listening to the world itself. Sometimes the wind rushes strong and whispers in the grass, or sometimes it’s you cutting a swathe through a field making it rustle. Calm rivers ripple and great waterfalls roar out mist. When it’s sunny and quiet you can still hear Link’s feet, and the gear on his back, which knocks with a different noise if he’s using wooden weapons or metal ones. When it’s raining softly you hear little patters, and when a storm rages you hear thunder and lightning, and see other people running for cover.

Even the other people and animals you meet fit nicely into the wild, which has made a space for them rather than them making a space for themselves. The villages fit around existing hills, canyons, or rivers of lava, and mostly sound like wind chimes, flags, and cooking fires. The Koroks, little wood spirits with leaf mask faces, sound like hollow wood knocking together. But the deeper into the wild you get, the more enemies you run into. They, particularly ancient mechanical ones like the cephalopodic, six-legged Guardians, have noises out of sorts with everything else. Their unnatural scrapings across your ears make it all the more imperative that you dispatch them, or get away from them yourself. They shouldn’t be here! They’re ruining it, the ruiners!

This is especially galling when they come back whenever a blood moon rises, a method Nintendo have used here  to not make the game lose its moments of peril but not use inexplicable respawning. But coming back from the dead isn’t allowed: only I, the hero, should be allowed to do that! These insolent lizards must be dealt with! Accompanied by the heartbreaking, slow-motion crystalline shattering noise that your sword makes when it finally breaks.

I’m thoroughly convinced, along with, I’m sure, anyone else who has played the game, that while yes, there is a whole thing with Princess Zelda and Ganon and what have you, Breath of the Wild is almost entirely about the world, and when you play you should be listening to it. You can hear rivers before you see them, and enemies before you run into them. If you listen hard enough you can hear secrets, and faires, and find your way through the lost woods. When the wind whips up you can hear how empty it all is. How vast the stretches between points of civilisation and safety are. How Link, taller though he may be now, is so small compared to it all.

Here, more than ever, Link must be smart. He must look after himself almost entirely. The most grown up he’s ever been. But that’s fine. To grow up; to live; to die. What an awfully big adventure.