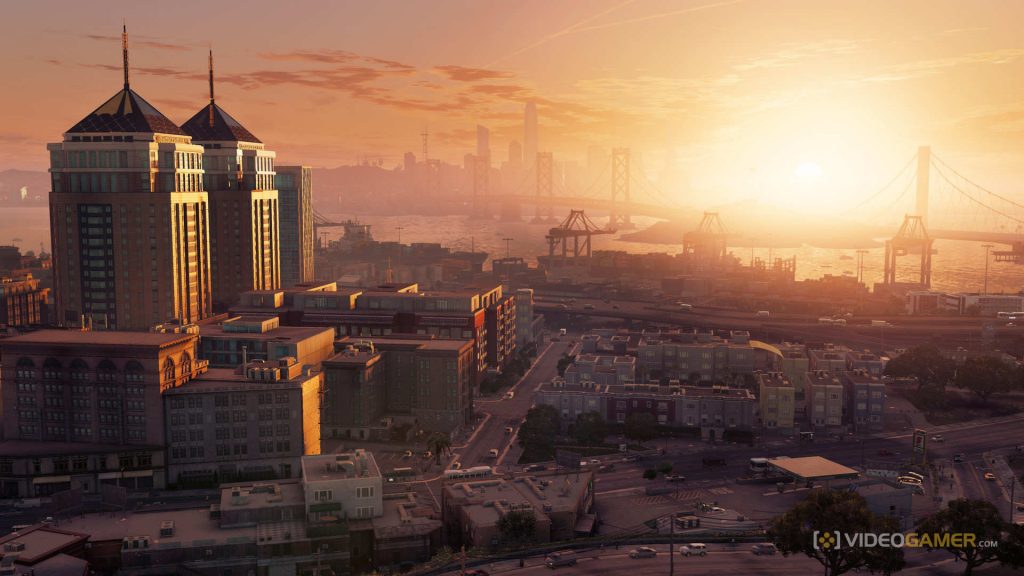 The best of the real world in Watch Dogs 2

Cyber Driver is basically the first main mission you play, and I am caught between not wanting to spoil it too much and wanting to gush about all of the hilarious details in it. Cyber Driver is the new film fronted by Jimmy Siska, an action movie star that Marcus and Wrench are both big fans of. Cyber Driver is foremost a pastiche of cheesy 80s action like Knight Rider — Siska plays Devon Von Devon, a dude in aviators “looking for cyber justice” with the aid of a talking car — but it revels in tugging on other satirical threads.

Devon Von Devon’s Cyber Driver jacket, for example, is pale leather with a cobra emblazoned on the back, definitely nothing like the jacket every bellend decided he had to have after seeing Drive and then realising he couldn’t carry it off (wearing that jacket whilst not Ryan Gosling being the fashion equivalent of painting your outside wall orange and then wondering why it looks shit on your semi in Surrey when it was amazing on the houses in Morocco).

Then, while Marcus is racing through the streets in said talking car, the AI informs him that “Your face is too dark for my sensors to read,” inescapably referencing how facial recognition technology has classically had issues with darker skin, including the Kinect camera. (http://www.gamespot.com/articles/kinect-has-problems-recognizing-dark-skinned-users/1100-6283514/). Cyber Driver does a good job of immediately keying you into how the rest of the game will be, i.e. loud, self aware, slightly ridiculous, but with an emphasis on fun.

A sham religion that costs money to join, has different levels of seniority to reach, courts celebrities, reconditions dissidents with rebellious thoughts, conducts tests and interviews on its members, has suspiciously heavy-handed security, releases private information to the public as a means of silencing critics, and has attracted the ire of masked hacktivists. I can think of no direct comparisons to famously litigious organisations, no sir.

Swelter Skelter is a version of notorious week-long sweaty steampunk-tech-hippy-fest Burning Man. There’s not really a mission to do here, per se, it’s more of a rest beat in the game that also serves as a bonding session and/or heavy weekend for DedSec. It’s enjoyable firstly for letting you run around a bit and look at a bunch of weird NPCs doing weird things, and secondly for DedSec’s festival outfits, especially Wrench’s, which may be described as Tina Turner Thunderdome meets fetish night in the NFL locker room, and is delightful.

Marcus’ phone in Watch Dogs 2 is your menu. Through it you can access the options menu, check your missions and that kind of thing, but it also has actual smart phone stuff. It has an app store, with apps that cost a couple of dollars. The Uber clone, which you can use to earn some money on the side, is called Driver SF (itself a reference to Driver San Francisco, a Ubisoft game from a few years ago). There’s a music library, so you can change what Marcus is listening to, and add tracks using an app called Song Sneak which bears more than a passing resemblance to Shazam. Then you have ScoutX, a way to boost your followers by going to landmarks around the bay area and posting photos of them to the app. There’s a feed in the app that includes your DedSec friends’ photos too. They leave comments on yours. It’s pretty cute.

Nudle is Watch Dogs 2’s Google. The map in your HUD is supplied from the Nudle Maps app on your phone. At one point you get to visit the Nudle campus (your friend Horatio informs you he’s one of only four black employees in the entire place, and that he’s continually complimented for being ‘well-spoken’). It’s all bright primary colours, glass architecture, and plastic tubes swooping in and out of buildings. Inside, the office is open plan. There are potted plants everywhere. All the Nudle employees’ online profiles show they do ironic creative stuff, like knitting even though they’re in their mid 20s. A disproportionate number of them are allergic to soy. It’s amazing.

Ubisoft put in the San Francisco office, replete with massive poster advertising the Assassin’s Creed movie. Remember to take a selfie to upload on ScoutX, because Ubisoft has made its own office a landmark in the game, and fair play to the cheeky bastards. You can actually pick up a mission to hack into their confidential files to steal an E3 trailer, which may or may not be a trailer for a real game Ubisoft is actually working on.

Gene Carcani is the CEO of a pharmaceutical company in Watch Dogs 2, who bought a leukemia drug, raised the price of the drug by an astronomical percentage (which he was technically within his rights to do), and then went on TV to brag about it. He was then public about wanting to exclusively buy a famous rapper’s new album.

In September 2015 Martin Shkreli, who is the head of a pharmaceutical company in real life, bought a drug used to treat AIDS, increased the price of a single dose by a factor of 56 overnight (which he was technically within his rights to do) and then went on TV to brag about it. He then bought the only copy of the Wu-Tang Clan’s album Once Upon A Time in Shaolin for $2 million.

Getting revenge on Gene Carcani in the game was cathartic, I won’t lie.

Thruss is a congressman running on the campaign slogan ‘Let’s make the bay area great again.’ Turns out he’s incredibly corrupt, is planning to rig the vote, and is deleting incriminatory information by the time DedSec get on to him. What a truly hilarious over the top take on real life that would never actually happen. Good one, Ubi!