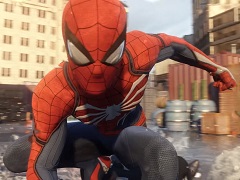 Spider-Man PS4: Everything We Know About Insomniac’s New Spider-Man Game

Insomniac’s collaboration with Marvel for a Sony exclusive Spider-Man game won the silver medal for “Game People Got Most Excited For While Knowing Nothing About It” (the gold went to Kojima’s Death Strading trailer; Spider-Man lost out due to people knowing who the protagonist is and where he’s from). Although we know very little about it, there are some details in the trailer and from a Sony livestream interview that are worth knowing.

By which we mean: it isn’t connected to the Marvel Cinematic Universe, or the previous Spider-Man games. Doing the rounds at E3 were Bryan Intihar from Insomniac and Bill Roseman from Marvel, and they’ve confirmed that this is an all new story in a new world, but that the game takes inspiration from all the other stories and comics. Intihar has said they’ve had a lot of creative freedom to experiment with “respecting the traditions of the franchise but mixing things up”.

This is probably best represented in Spidey’s new suit (every new Spider-Man get’s a new suit, it’s basically a given now), which has the weird motorised eye scowl from Tom Holland’s MCU suit, as well incorporating some design elements from classic Spidey suits, and the physical web launchers. The big new change is the chest sized white spider logo splashed across the front, which takes a bit of getting used to. According to Intihar and Roseman, however, there is a reason his suit looks the way it does, and they’ve put thought into it beyond “Would it look cool with more white on there?”

This Spider-Man is still Peter Parker

Any fans of Miles Morales are still going to have to wait to see him out of the comics. This Spidey is still going to be Peter Parker, although it’s an older Peter who’s been at the superhero gig for a while. There’s been no sighting of a girlfriend who can risk her life by staying with Peter this time, but the fact that he’s older does mean we hopefully won’t have to play through a tedious origin mission where Uncle Ben imparts wisdom and dies in Peter’s arms. Again (Ed – ever heard of flashbacks, Alice?).

Some weird stuff can still go down with Peter Parker, though. The Spider-Verse in general is prohibitively complicated, including alternate universes and clones of Peter Parker. Entertainment Weekly just confirmed that the new Spider-Man comics story is going back to the clone well, and will be called The Clone Conspiracy, so there are already some people voicing the opinion that this won’t be the original Peter Parker. But it’s definitely a Peter Parker.

Yup, the magical phrase “open world exploration” was used, although not expanded upon. We can see here a skyline, which we can assume is New York somewhere, although Spidey makes mention of being from Queens in his voice over, and what with the increased power of the current generation (and possible new generation that somehow doesn’t count as a new generation) it might not be far fetched to hope for some areas outside of Manhattan Island to be included. Previous Spider-Man games have had incidental activities to save people from robbers as you swing around the city, that kind of thing, so we wouldn’t be surprised if there’s something similar in this game.

Swinging is back, and elsewhere in the trailer we see Spider-Man at ground level and on top of cars. It’s already being noted by a lot of people that in the trailer the streets look a lot busier than previous games. Intihar and Roseman also talked about Peter having a “complete traversal set” which includes parkour, and in part of the trailer we can see him moving through a coffee shop and smashing out the opposite window, doing mad backflips and other cool stuff, but there’s no telling how much indoor traversal you can do as part of your regular travel through the city – it seems unlikely that every building in the game will have an inside you can merrily crash through.

Intihar says that the ways Peter’s experience in this game shows is in the way he moves and fights. The trailer shows some interesting aspects to potential combat, one being Spidey using what looks like an air vent as a weapon (which could also point to some destructible elements in the environment, but let’s not run away with ourselves here). Intihar talks about how Peter Parker now has more mastery of his skills, so it could be less haphazard webs everywhere and more chained and smoothly executed, which makes us think of the combat in the Arkham series.

Another shot that calls Arkham to mind shows Spidey taking down a henchman on a roof by landing on him at speed from a distance, kind of like the targeted drop/swoop attacks Batman could pull off in Arkham. Whether something like that appears in the final game or not, it looks like using Spider-Man’s webbing creatively will be a big part of the combat. In this shot you can see Spidey using his webbing to enhance his melee attack.

There’s not much to go on as far as plot is concerned (mainly because nobody is giving anything away yet, and the game is still at the ‘In Development for PS4’ stage of production) but there are some clues to be found in the trailer. The goons featured in the trailer wearing masks look very much like they could be the Inner Demons, the henchmen for Mister Negative. Mister Negative has a split personality: one a crime boss, the other a nice dude who runs a soup kitchen that Spidey’s Aunt May has been known to volunteer at. Intihar quoted Roseman as saying that the best Spider-Man stories come from “times when Peter’s world and Spider-Man’s world collide,” and Mister Negative’s story would definitely count.

There’s also the presence of the Osborn family. As Spider-Man swings through the streets in the trailer you get a very brief look at a sign on the left reading ‘Osborn for Mayor’, although we can’t make out what the top left of the sign reads. This could be Norman Osborn, probably the most likely candidate since he’s older and it tends to be old rich people running for political office generally, and in an alternate timeline in the Battleworld Norman ended up being mayor of New York in the little Spider-Verse sector (it’s all the comics, it makes marginally more sense in context). Since we know Peter is older, however, there’s a possibility that it’s Norman’s son Harry making a comeback with the family name after Norman getting booked for murder, although this seems less likely (and the game probably isn’t following the conventional timeline in any case).

No matter which Osborn it is, we’re willing to bet the family is involved somehow. In this shot of Spider-Man falling/swinging around a crane you can see the sign it’s knocked off has a C and a P still attached, which looks like the remnants of an OSCORP to us. The inclusion of the Osborns does look like Insomniac really is respecting the traditions of Spider-Man, we must admit.