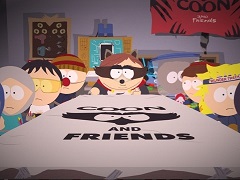 After the announcement of a sequel to South Park: The Stick of Truth at E3 last year, both Ubi and the South Park creators Trey Parker and Matt Stone were pretty quiet on details. During Ubisoft’s press conference this year we got a better look at the gameplay, a new trailer, and the lead designer gave out a few more details in interviews around the event. There was speculation that moving development from Obsidian, who made The Stick of Truth, to an in-house team at Ubisoft SF would mean the game was changing a bit, and it looks like that might be right. Here’s everything we could figure out so far.

The Coon and Friends

The Fractured But Whole takes place the day after The Stick of Truth, when the kids have switched to playing superheroes, so while your character rose to the top of the fantasy storyline, they’re now back down at the bottom of the ladder as a superhero. The boys are split into two factions again, this time fighting over the best way to go about having a multi-million dollar superhero franchise. Coon and Friends (Cartman, Kyle, Jimmy, Craig, and Clyde) are the original group, and from the gameplay shown it looks like you go to them first to get your superhero alter ego, but there’s also the splinter group Freedom Pals (Kenny, Stan, Tweek, and Token), and if this plays out in a similar way to the previous game you could join either group. However, the gameplay footage also shows fights using a combination of heroes from both sides, which suggests they’ll work together at some point.

As for how the plot plays out over the whole game, we don’t know much yet. We know from the trailer that the girls will be in it (Wendy looks like some kind of tech-centric communications hero) and there are shots where buildings in the town can be seen exploding and on fire. The lead designer Ken Strickland has said in interview that it tells a story “about South Park in a real sort of crisis”, although he does then go on to talk about playing with the dissonance between the kids thinking things are really epic when “it’s really not a huge deal,” so it could be six of one, half a dozen of the other.

Butters’ supervillain Professor Chaos is definitely showing up, though he may not be the main antagonist (at least for the whole game), since there’s a shot of him fighting alongside Coon and Friends. There’s also a post title reveal of PC Principal from the most recent series. Strickland has also said that the engine they’re using (which is the same as the one used in making Tom Clancy’s The Division) can rip assets straight from South Park studios, meaning the devs can incorporate elements from seasons 19 and potentially even season 20 of the show, and are “afforded some of the flexibility that the show has to react to current events,” so make of that what you will.

Respeccing, dual speccing, and playing as a girl

We know from the briefing at Ubi’s press conference that you can choose a class for your hero, although only three were shown in the on-stage gameplay. The Brutalist is “a close-range brawler specialising in first-related injuries and hitting enemies into near-earth orbit, the Blaster is a damage dealer that’s “deadly at angry range”, and the Speedster “is a hero capable of bending spacetime in order to mete out justice”. There are, however, a dozen different classes to play as which will unlock later in the game (although we don’t know at what rate, how, or when). The E3 extended demo reportedly showed more classes, called Mystic, Cyborg, Psychic, Assassin, Elementalist and Karate Kid. You can switch between these classes, and combine them to dual spec (dual specialisation, for anyone who doesn’t habitually play RPGs) and customise your hero. You also, in some form, keep the magical farting powers you had in the first game, though there are still no specifics.

The new big talking point, as revealed in an Entertainment Weekly interview with Trey Parker and Matt Stone, is that your character can be a girl this time. Stone said that “they’re going to treat you different” if you do play as a girl, so it could be worth having two separate playthroughs to see how the game is different – although there’s no indication that it will affect anything beyond, potentially, dialogue.

During the conference Parker mentioned that he’s a big board gamer and that they and the dev team would play board games and “tabletop miniature type games” while discussing elements of The Fractured But Whole. The influence of tabletop RPGs is pretty clear in the new combat that’s been shown, which now allows you to move and push enemies (many of the attacks associated with different classes have a knockback effect to them), you can use the battle environment to get cover, and there’s an attack order that you can change with some powers as well. Status effects like Bleeding and Marked are back, and you can push enemies into your teammates to trigger what looks very much like an attack of opportunity against them. This is all classic tabletop stuff, also reflected in the number of different classes.

Strickland has confirmed that the party size in the game is expanding from three in The Stick of Truth to four. It looks like the classes are going to be more representative of the roles you traditionally need for a balanced RPG party (e.g. a damage dealer, a tank, a healer, a ranged/control character), so it’s shaping up to be a slightly more complex system that allows for much more customisation. You can also use different combinations of heroes to get different ways to explore the town (using The Human Kite’s kite, for example), so it’s not a massive intuitive leap to think you’ll be able to combo attacks during combat as well.

Strickland says that they haven’t massively changed the layout of South Park for The Fractured But Whole, because there’s no need and it would make it a little confusing for players of The Stick of Truth. He did say that it’ll include some of the changes South Park has undergone in the more recent series’ – in the trailer we can see Mysterion keeping baleful watch over historic SoDoSoPa. He also said that for The Fractured But Whole the fights will be “taking place in locations you’re familiar with from the show,” rather than an “abstract battle space” as in The Stick of Truth.

When asked about the actual size of the map Strickland wasn’t giving much away, but did say that there’s more to exploring the town, and that the game isn’t going to be entirely scripted events, either. There will, he says, be a lot more to discover.