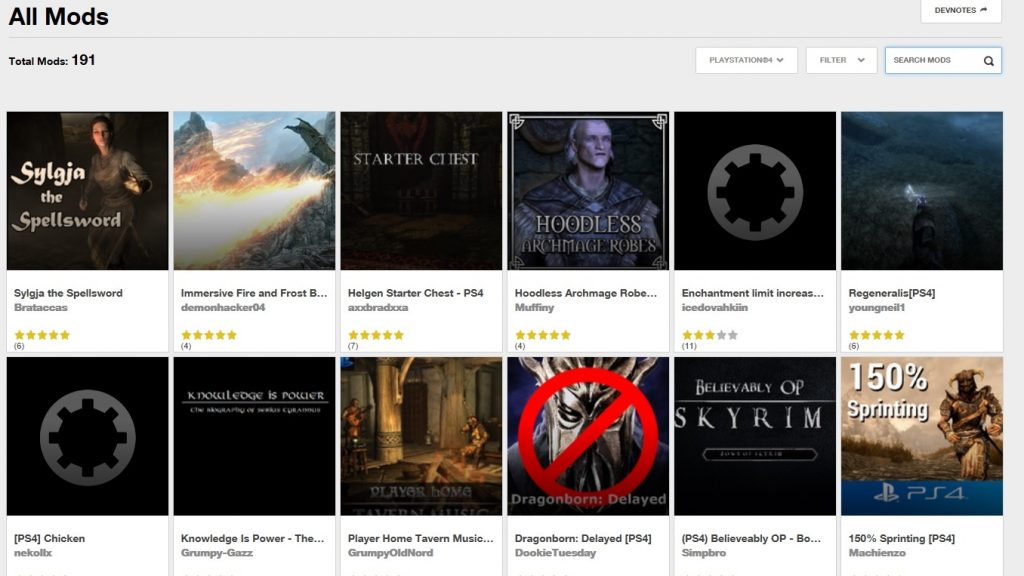 Skyrim Special Edition: the state of mods on PS4 and Xbox One

There’s a Skyrim mod called The Forgotten City. It adds an entire new area in the form of a city trapped underground, and a questline involving time travel, paradoxes, mystery, a suspicious Jarl, rgonians that might eat you, and an extremely strict rule of law enforced by Dwarven statues. It’s fully voiced, and even has its own orchestral score. There are multiple endings. Sounds pretty cool, right? Well, if you’re playing the Skyrim Special Edition on PS4 then it sucks to be you right now.

The process for downloading and installing mods is actually incredibly easy. There’s a new option on the home screen that takes you directly to the mod menu. You can browse them by popularity and different themes, favourite ones you’re interested in, check the reviews, and get them installing straight away. The game will take a few moments to get itself together, then let you know that achievements are disabled for modded saves, and away you go with your shiny new benefits.

The kicker is that stuff like The Forgotten City, like many mods, is available on Xbox One, but not PlayStation 4. The whole mod debacle – wherein Bethesda posted a short blog on September 9 that wasn’t so much passive-aggressive as it was aggressive-aggressive, effectively cancelling mod support for the PS4 and blaming Sony, and then posted another blog less than a month later confirming mods were back on, kinda, with some restrictions – was a strange one to watch unfold. There’s probably at least one person in either company that will now never forgive the other (like Battle-Borns and Grey-Manes, am I right Skyrim fans?)

So mods are on PlayStation, but you can only install one gig’s worth when their size is added together (the Xbox gives you five). They’re also restricted to using things already in the Bethesda workshop, which means no external assets. Right now the mods for PS4 are nice, but practical: mods to make you look frosty in the snow and wet in the rain, mods so there are friendly lamps lighting the lonely roads, mods to add more realistic exposure and camping mechanics. You can’t get the mods adding new playable races, the Toejam and Earl soundtrack as adventuring music, or one called ‘Immersive Wenches’ which is a fancy way of saying it adds barmaids with big tits. These are all things you can find in the Xbox mods.

Granted many of you playing on PS4 will be able to live without, e.g., bright purple mage robes that are slit to the navel, but the exclusion of the massive works of art like The Forgotten City, or Falskaar, a story mod built by one 19-year-old which adds an entire new island, approximately 20 hours more game and now has its own mods, seems shortsighted. They’re not janky, suspiciously coded mods that are released untested with the potential to brick consoles. Some of them have won reams of awards. Every effort has been made to make them feel authentic and immersive, but in some cases the pursuit of this is what has prevented them making it to PlayStation – original musical scores and custom recorded voice acting are external assets, so your huge, acclaimed, beautiful mod made with love, with your heart and soul poured into it, can naff off.

There’s a chance mods could crash your console, but it’s a chance Xbox users seem to be taking with gusto, and you can be an intelligent consumer about it rather than blindly choosing to download every half-baked ‘this gives u purple hair’ mod you come across. Sony has removed the choice entirely, which mitigates an amount of risk, sure, but is also blocking off a load of cool content for its consumers and courts turning people off the platform. Right now I, for example, am telling you it’s better to get Skyrim on Xbox than it is on PS4. On Xbox you can get loads of mad-cool story stuff as well as a B.C. Rich Warlock NJ guitar that has not only a ’25 ½ inch scale neck with 24 frets’ but also functions like a greatsword with a base damage of 28. So it’s kind of a no brainer.

The battle of the mods on console is, however, not really a concern if you’re playing on PC, where the modding arena is an unregulated utopia where Macho Man Randy Savage and Thomas the Tank Engine rule the skies, and if modding is your primary concern you’re probably already playing Skyrim on your computer. By comparison the state of mods on console is, at this early stage, a mixed bag. While more mods are being made available all the time, it’s a gradual process and so far the mods for Xbox number twice as many as those for PlayStation Neither console, however, yet has the mod that puts tiny top hats and monocles on the mudcrabs. So what even is the point?